ECR Engines Power Four of Top-Seven Qualifiers for 2012 Rolex 24 at Daytona
Angelelli puts No. 10 Chevrolet Corvette on outside pole for 50th anniversary race 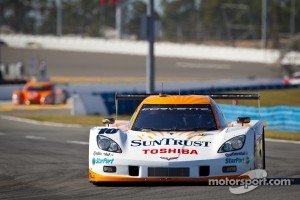 Max Angelelli drove the No. 10 SunTrust Racing Chevrolet Corvette Daytona Prototype to the second spot with a lap of 1:41:240 minutes on the 3.56-mile, 12-turn road course. The Wayne Taylor Motorsports entry was a mere 0.121-of-a-second slower than surprise pole winner Ryan Dalziel.

"The speeds of the ECR Engines cars are really good, in the dry and in the rain," said Richie Gilmore, general manager of ECR Engines. "The No. 8 car just snuck up and grabbed the pole. Everyone seems to be very excited about the new Chevrolet Corvette so, now, it's all about survival, lasting all 24 hours of the race."

"I cannot hide my disappointment, obviously, leading free practice through this and I'm P2," Angelelli said. "I was not expecting P2 in the end but I still feel our car is really good and really fast. I still feel that we'll be the car to beat for the 24-hour (race)."