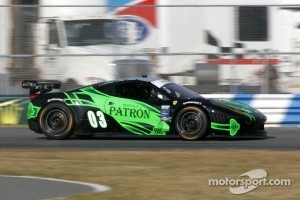 DAYTONA, FL, Saturday, January 28: Ferrari makes a welcome return to the Rolex 24 Hours of Daytona today with Exteme Speed Motorsports fielding one of four Ferrari 458 Italia Grand Am entries in the 50th anniversary of the Florida round-the-clock enduro. The last Rolex Series victories for the Prancing Horse marque came in 2002 when the Ferrari of Washington-entered Ferrari 360 GT won five races en route to the series championship.

Ferrari however does have a strong winning heritage at Daytona. Pedro Rodríguez won a three-hour sportscar event at Daytona in 1963 and teamed up with Phil Hill to win a 2000-mile enduro the following year.

When you start with a road car to produce a race version, you normally have to speed it up. For the Ferrari 458 Italia Grand Am, they actually had to slow it down.

While the race version is 363.4 pounds lighter (almost like throwing out two passengers), the car has 61 less horsepower and 1000 less revs at its disposal for the Rolex 24 at Daytona.

Much of the weight savings comes from the Hewland gearbox which is operated via paddle shift on the steering wheel.

The race car has slightly more torque, is a little longer and wider and slightly lower overall. Unlike the road car, the 458 Italia Grand Am race car also features a rear wing for Rolex Series competition.

The major differences are highlighted in bold below:


"We are very proud to represent the Ferrari brand in the American Le Mans Series presented by Tequila Patrón and we are very much enjoying our time for the 458 Grand Am spec car as well," Extreme Speed Motorsports owner/driver, Scott Sharp said.

"For our sponsor Tequila Patrón, the ability to link with such a prestige brand like Ferrari is an outstanding opportunity.

"Myself, Johannes (van Overbeek), Ed (Brown) and Guy (Cosmo) are all really looking forward to the race today. It is our first assault on this race and we're thrilled it comes in the 50th anniversary event.

"Johanness will take the green flag at 3:30pm today and we'll cycle through all four guys early - it is a long race and it is important for us to settle into a good routine."