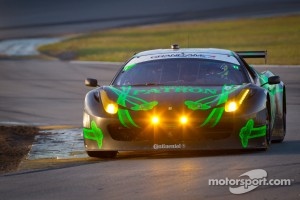 Extreme Speed Motorsports topped the practice charts earlier this weekend in only its second GRAND-AM Rolex Series event of 2012. Brown and Cosmo piloted the No. 03 Tequila Patrón Ferrari Italia 458 to a 13th place finish during the rain-shortened Grand Prix of Miami on Sunday afternoon.

That 13th place finish doesn’t show the speed and effort put forth into this weekend’s event. On Friday afternoon, Cosmo was the quickest car of the GT class during the final dry practice session of the weekend.

Rain showers all day Saturday forced GRAND-AM Road Racing officials to cancel qualifying. Per the GRAND-AM rulebook, the starting grid was set by team points. Based on the points ESM earned at the Daytona race, ESM was set to start Sunday’s race in the 16th position.

Had Extreme Speed Motorsports been able to qualify the No. 03 Tequila Patrón Ferrari, the team and drivers were confident in a top-five starting position.

Sunday’s race began under a weather-related yellow flag which was immediately changed to green in the opening laps. Competing in the Rolex Series for the first time in wet conditions, Brown was the lead-off driver for ESM.

Brown battled the competition and maintained his position for the majority of his stint. Approximately one hour into the scheduled two-hour, 45-minute event, Cosmo took over driving duties in anticipation of lighter rain and the possibility of green flag racing.

When Cosmo joined the on-track competition, the ESM Ferrari was in the 19th position. During his stint, Cosmo improved the team’s position by six spots and ultimately finished the race in 13th place.

GRAND-AM officials halted the race with nearly an hour remaining on the clock. Shortly after officials stopped the event, the rain lightened and skies appeared to clear. Had the race continued, the Extreme Speed Motorsports team was on their way to a possible top-10 finish.