Englewood Cliffs, N.J.- A wild race at Lime Rock Park on Saturday that brought an end to the GRAND-AM Rolex Sports Car Series also brought a sweep of the season’s GT-class championships to Ferrari. 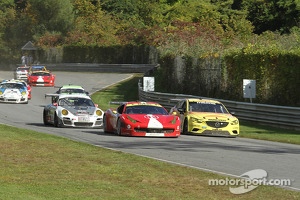 After he qualified the no. 63 Scuderia Corsa Ferrari 458 Italia in second position, Leh Keen kept his teammate and his team in a position to win the championship during the opening stages of the race before handing the car over to Balzan.

Battling throughout the race for a podium position, and surviving a heavy hit from another GT-class car, Balzan survived a chaotic final hour and a late-race restart to finish in second position. Just behind was the no. 64 Scuderia Corsa Ferrari 458 Italia that was driven by Jeff Westphal and Johannes van Overbeek.

“I was never relaxed during the race since things were always happening in front of us, behind us, or next to us,” said Balzan. “The DP’s were passing us and sometimes it was a nightmare because you know that you are leading the championship but you also know that you are losing so much time in traffic.

I am very happy for the team. Everyone at Scuderia Corsa, really deserved it. It’s really crazy to think we are champions in the first year. I have to thank Giacomo because he believed in me, otherwise I would have never gotten the seat. I’m a 100% Scuderia Corsa product, and it is a dream for a little Italian driver coming from Italy that is now living in Modena.”

“It’s an amazing, amazing experience for Scuderia Corsa to win its first championship,” said Mattioli. “My first thought is to thank the people behind this project, starting from Marco Mattiacci of Ferrari North America, and my technical director Roberto Amorosi, the whole team – too many to name – and obviously Alessandro.

Alessandro has had a fantastic season. He didn’t know any of the tracks, didn’t know the tires, and I think he adapted so well. We decided to bring out the no. 64 Ferrari and they did a great job. We had two great drivers that had raced with us before – Johannes and Jeff. They were on top of their game, and the car was very good, and they scored a great podium result.”

Mattiacci, the President and CEO of Ferrari North America, was in attendance to see the trio of championships secured on Saturday.

“The manufacturer championship is very important for Ferrari, because it demonstrates not only the phenomenal performance, speed, balance, but also the reliability of the 458 Italia,” said Mattiacci. “To win it for the second time, against the high level of competition in the Rolex Series in the United States, is an achievement we are very proud of. This was only possible because of the great preparation and driving of all of our teams – AIM Autosport Team FXDD, R.Ferri/AIM Motorsport, and Scuderia Corsa.

“Alessandro Balzan and Scuderia Corsa have done an incredible job all season, showing an impressive consistency and are very deserving GT champions. They rightly enjoyed a lot of support from Ferrari owners today at Lime Rock Park. Our thanks goes as well to all the team at Corse Cliente, our sponsor and supporter Motorola and naturally to all the GRAND-AM organization.”

Contact relegated the no. 61 R. Ferri/AIM Motorsport Ferrari 458 of Alex Tagliani and Jeff Segal to seventh position, while the no. 69 AIM Autosport Team FXDD Ferrari 458 Italia of Emil Assentato and Anthony Lazzaro was forced to retire with damage to the car’s radiator.

To commemorate the championship, Ferrari has launched a website to chronicle the trio of Rolex Series GT championships which can be seen at Ferraridoesitagain.tumblr.com.

Balzan, Scuderia Corsa and Ferrari will receive their championship trophies at the Rolex Champions Awards at Gotham Hall in New York City on Monday night.

Steiner: Schumacher and Mazepin tensions 'blown out of proportion'