GRAND-AM makes maiden visit to Road Atlanta this weekend; however quite a few of the series drivers have raced at the historic circuit in Georgia

Many GRAND-AM drivers are familiar with the ultra-quick 2.54-mile Road Atlanta circuit and the unique challenges it presents for drivers and teams.

“It's difficult, it's tough,” said Daytona Prototype points co-leader Scott Pruett, who drives the No. 01 TELMEX BMW/Riley and is returning to race at Road Atlanta for the first time in several years. “It's one of those places where it's going to take a good balance of the race car to kind of get down through the esses and then obviously trying to blend how much downforce you run for drag down the back straight.

It's going to be very challenging because of the racetrack layout.

“I’m excited to get there, and it's been a lot of years, but we can hardly wait to get on track on Thursday.”

“It's going to be very challenging because of the racetrack layout,” added No. 10 Velocity Worldwide Corvette DP driver Max Angelelli, who also has considerable previous experience at Road Atlanta. “You have slow speed corners and a very long straight. It's going to be a little bit like Circuit of The Americas where teams will take different paths; more downforce, then you have to pay consequences on the long straight, or less downforce and you pay consequences on the slow corners.”

Through the first three rounds of the GRAND-AM Rolex Sports Car Series season, three Daytona Prototype teams have established themselves as early championship favorites. Each with one win this season, these three teams – separated by a mere five points – represent the three winningest organizations in DP class history.

Rolex 24 Winner Donohue Returns To BGB For Road Altanta: David Donohue earned a victory in with Napleton Racing in the Rolex Series GX class debut in the 2013 Rolex 24 At Daytona.

Donohue will return to the class this weekend at Road Atlanta, co-driving the No. 38 BGB Motorsports Porsche Cayman with GX points leader Dr. Jim Norman. Norman is undefeated in three GX races, winning the Rolex 24 with Napleton and taking victories at Circuit of The Americas and Barber Motorsports Park with BGB.

Donohue was a regular in the Daytona Prototype ranks from 2003 through 2012 with Brumos Racing and Action Express Racing, winning four races – including the 2009 Rolex 24 – and eight poles.

Action Express Racing also shuffled its lineup prior to last year’s race at Detroit Belle Isle, and the team responded with a 1-2 finish. 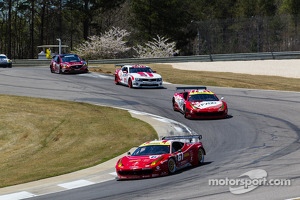 Evander “The Real Deal” Holyfield will have a rooting interest when he attends Saturday’s PricewaterhouseCoopers 250.

Holyfield was boxing’s lone five-time world heavyweight champion, with his record including victories over George Foreman, Larry Holmes and two triumphs over Mike Tyson. Accompanying him to the race will be Henry Tillman, who won the gold medal in the heavyweight division in the 1984 Olympics.

Smith, who will be making his GRAND-AM debut in the event, is a graduate of NASCAR’s Drive for Diversity program and a competitor in the NASCAR K&N Pro Series East. The 26-year-old native of Beacon Falls, Conn., scored a fifth-place finish at Iowa Speedway in his second K&N Pro Series East race in 2007, and finished 11th in the 2009 championship.

Weisberg is the owner and team principal of Berg Racing, based in Webster, N.Y. The two-time IMSA Lites champion (2009-10) is in his second year of Continental Sports Car Challenge competition, occasionally co-driving with his wife, Dinah Weisberg.