Lexington, Ohio (8 June 2012) – Michael Shank Racing will start the EMCO Gears Classic from the fourth row of the GRAND-AM Rolex Sports Car Series grid on Saturday after John Pew posted a quick time of 1:19.837-seconds around the 2.258-mile Mid-Ohio Sports Car Course as the team is set for their first home race as the reigning Rolex 24 Champions. 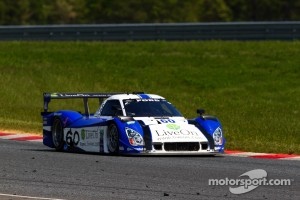 Pew will open the 2.5-hour race before turning the controls over to co-driver Ozz Negri who will take the No. 60 LiveOn Ford-Riley to the finish in front of many hometown fans in attendance.

“I was hoping to qualify a little bit better because we’ve been working really hard on the car the past couple of days,” said Pew. “There’s definitely more there, but we haven’t quite figured it out yet with more speed, so we’ll be looking at all the data we can tonight. We’re trying our best, giving it 1000%. We’ll see what happens in the race. Anything can happen in a race here so we’ll just try to keep it clean and be there at the end.”

Despite the disadvantage of competing against the higher downforce Corvette machines, the Shank team has shown strong pace and good results over the past few races. The group looks to carry that momentum into their home race on Saturday.

“We really aren’t able to compete against the Corvettes and I’m upset about that, but John did a hell of a job in qualifying,” offered team owner Mike Shank. “He picked up a ton of time and I’m really pleased for him. That’s what I was hoping for and it was just a great job. Hopefully we’ll have a strong run tomorrow here in front of our hometown fans. It’s great to have all of the support here this weekend and we’d like to give everyone a good result.”

Harvey: If the opportunity is there to win, we’ll go for it