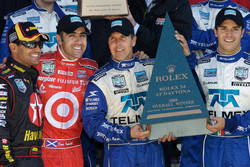 The Ganassi foursome ran virtually trouble-free from start to finish despite the rainy conditions, leading 252 of 695 laps and finishing two laps ahead of the Bob Stallings Racing Pontiac Riley shared by Alex Gurney, Jon Fogarty, reigning NASCAR Sprint Cup champion Jimmie Johnson, and former CART champion Jimmy Vasser. The win was the third straight for Lexus and Riley in the Rolex 24. Ganassi cars have led 53 percent of the total laps completed in the last three Rolex 24 races.

"This was tough," admitted Pruett, who has three overall Rolex 24 wins. "There was a lot of really hard, fast cars that we were up against. Everybody did a great job. You always had to push hard in the car. The conditions were pretty treacherous because it was rain and then it was dry and then it was a little bit of wet and then you weren't sure whether to go (with) wet or dry tires. And then it rained again.

"That makes for a really tough race and I think that's why we saw so many cautions. Those sorts of conditions are just horrible to drive in. In my view, this is the most difficult 24-hour race in the world. It's a true test of man, machine, and team because you can't appreciate all of the effort that's gone into the car before you even showed up at the race track. It's just such a challenge to do it and when you come out the victor, it's just awesome."

The treacherous conditions Pruett described led to 24 caution periods for a total of 95 laps, which equated to more than six hours of yellow flag conditions.

"It's a good way to start 2008," said Franchitti, a former Indy 500 winner who is Ganassi Racing's newest NASCAR driver. "The cars were prepared perfectly. I thought my job was to get through my stints and stay on the pace and not put any dents in the car or crash the car. And it makes it more difficult that every time I got in the car it started to rain. It was a hell of a team effort and I'm really happy to be up here. To win it means a lot."

"I think it's exciting," added Montoya, another former Indy 500 winner. "I think last year I felt we had a stronger car and we thought it was a car that was fast enough to win. But this year, if it would have come down to it, it would have been a lot harder. But it worked out pretty good. We pushed really hard every stint I was in the car. It's a good way to start the year for all of us. We all worked and we did what we needed to do."

Indeed, the outcome could have been different if the Bob Stallings Racing team had not experienced gearbox issues early Sunday morning, when it was reeling in Rojas. However, the team's second-place finish was a drastic improvement over last year's 22nd place finish. "We didn't realize how much of a penalty that would be to finish 22nd," explained Gurney. "So we came in this year with a different outlook. We always wanted to win, but we feel really good about our position in the championship and I think we're going to give Ganassi and the rest of them a hard time this year."

"It was an incredible effort," explained Busch. "I don't know what the expectation was coming in, but when you team up with the Captain, Roger Penske, you're only shooting for the best. So to have a podium finish is incredible. These two guys are such wheelmen that they helped me learn what I needed to do to take care of the car and to find a pace to run. It's tough running a lap time, but if you're over-exceeding your ability you can get into trouble. We did struggle with some overheating issues and we had to pit way too many times, which took us off the lead lap around four in the morning, but just to see us persevere and pull through was exciting. "

Rounding out the top five in the Daytona Prototype class were the Krohn Racing Ford Riley of Nic Jonsson, Ricardo Zonta, and Darren Turner and the SunTrust Racing Pontiac Riley shared by Max Angelelli, Michael Valiante, Ricky Taylor, and Wayne Taylor. The pole sitting Michael Shank Racing Ford Riley of Oswaldo Negri, Jr., Mark Patterson, Justin Wilson, and Graham Rahal ended up sixth after several flat tires and a broken suspension on Sunday morning dropped it out of contention for the win. The Alex Job Racing Porsche Crawford also led a number of laps before succumbing to engine problems on Sunday morning.

The next Grand-Am Rolex Series race will take place on March 29 at the Homestead Miami Speedway.