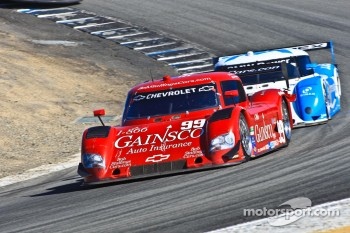 Appropriately enough, the benchmark race start ended with a Riley 1-2 finish as the GAINSCO/Bob Stallings Racing machine of Alex Gurney and Jon Fogarty showed flawless execution at Mazda Raceway Laguna Seca to take their first win of the season.

Gurney and Fogarty converted a small pit stop slip-up by the championship-leading No. 01 TELMEX BMW-Riley fielded by Chip Ganassi Racing with Felix Sabates to make the GRAND-AM return to Mazda Raceway a successful one for the Stallings organization. The team also won the 2009 Rolex Series event at the track as the group netted its first victory since the New Jersey Motorsports Park round in 2010.

The victory is the 81st run to the Rolex Series winners circle for Riley Technologies in GRAND-AM competition after the firm’s Mk XXII first debuted in the 2004 Rolex 24 At Daytona.

“It is really hard to believe that it has been 100 races for our cars in Daytona Prototype competition,” said Riley Technologies President Bob Riley. “This is really exciting for everyone at Riley Technologies. We are of course proud of the Riley design, and the support that we provide on and off the track, but this success and long-term involvement really comes down to the hard work and preparation by our customers and their teams week in and week out. Congratulations to Bob Stallings and his GAINSCO team, they’ve been knocking on the door pretty hard lately, so it was good to see them back on top.”

The weekend was in fact full of podium celebrations for Riley customers, as race day opened with a 2.5-hour Continental Tire Sports Car Challenge race. For the second consecutive race weekend, the Riley Technologies-built Stevenson Motorsports No. 9 Camaro GS.R of Matt Bell and John Edwards was the class of the field, leading 51 laps on the way to a second race victory after scoring a breakthrough win at Road America in Round 8. It was not just the Stevenson machine that showed strength on the day, as six different Camaro GS.R drivers led a combined 60 of the race’s 79 laps.

“After first debuting in the last race of 2009, we really had been hoping to see the Camaro on top quickly. Last year, we saw Stevenson qualify on pole, lead races, and get podiums,” said Riley. “Now they’ve taken two in a row so clearly they’ve got some good momentum and are really moving up in the championship. This was a great weekend and hopefully we can have this kind of day at New Jersey.”

Riley Technologies currently holds a 39 point advantage in the GRAND-AM Manufacturer Championship standings with four rounds of racing to go as the group pursues an eighth consecutive championship in the category.