Last week, the SpeedSource team packed up their trailers and headed to the West Coast for Round 8 of the Rolex Sports Car Series. Returning to Mazda Raceway Laguna Seca, where the series hasn’t been since 2009, teams looked forward to racing at the historic track under the warm California sun. The weekend proved to be a strong showing for both SpeedSource cars where the #69 FXDD Mazda RX-8 captured a 2nd place finish and the #70 Castrol Edge Mazda RX-8 closed out the podium with a 3rd place finish. 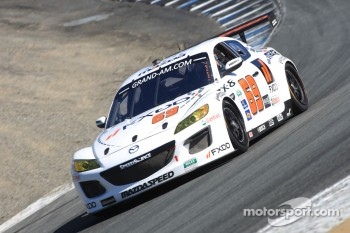 Defending GT Co-Champion Emil Assentato drove his #69 FXDD Mazda RX-8 to 6th on the grid for his strongest qualifying result of the season, thus far. Starting the race next to his team car, Assentato was able to settle into an early race rhythm. When time came for co-driver Jeff Segal to take control, the car was very much in contention with the leading GT cars. Segal continued to push through, bringing the car up to 2nd by the final caution period. The reduced pace behind the safety car allowed Segal to conserve much-needed fuel and maintain his track position. The weekend’s 2nd place finish is the team’s third podium finish of the 2011 season.

Sylvain Tremblay started the #70 Castrol Edge Mazda RX-8 from 5th on the grid and quickly pushed it up to the front of the GT field. Early race lap times would indicate a very quick pace. At the half-hour mark a caution bunched the field with Tremblay sitting comfortably in 4thposition before pitting. A blisteringly fast pit stop by the crew, which included four tires, fuel and a driver change, sent the car past the entire GT field into the lead. From here Monterey, CA native Jonathan Bomarito took control and started to open a steady gap on the rest of the GT class.

Knowing that fuel range would be the limiting factor of the race, strategists on the #70 Castrol Edge Mazda RX-8 began formulating a plan. It would seem that their efforts would come to fruition when Bomarito was able to beat a late race caution to pit for a splash of fuel. However upon rejoining the field, now in 3rd position, trouble with the clean-up crews would cause GRAND-AM to extend the length of the caution from a standard 10-minute affair to a nearly 18-minute timeout. The delay would prove costly for the #70 as it allowed the rest of the GT field to conserve enough fuel to make the race end. Nonetheless, the #70 Castrol Edge Mazda RX-8 put on a strong dominant showing all race and captured the team’s second podium of the season with a 3rd place finish.

The collaboration of all Mazda teams for the Monterey Festival of Speed at Mazda Raceway Laguna Seca further amplifies Mazda’s charge to the front of the manufacturers’ standings. Mazda sits second overall in points, trailing the leader by only 5 points.