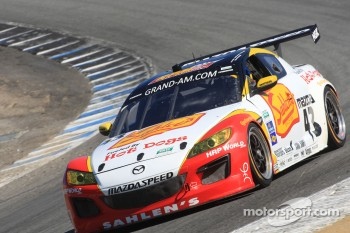 At the start of the race, Wayne rode comfortably in 2nd place, staying even with the lead #58 GT pole winner. Then at the top of the famous Corkscrew, Wayne was unfortunately punted off the track. The unfortunate incident resulted in the GT competitor being issued a Drive Thru penalty by Grand-American. Wayne recovered to jump back on the track and run comfortably in the top 4.

Everything seemed to be going according to plan, with the mandatory pit stop at the 45 minute mark. Then “Murphy’s Law went into effect. Will Nonnamaker in the #49 Mazda suddenly and mysteriously lost Fuel Pressure going into Turn One. This brought out the 1st caution of the day. Then under caution, the main oil line broke on the #42 driven by Wayne. This caused a scary fire out the right wheel well. Amazingly, Wayne was able to turn the RX-8 off and coast down to the pits. The Team Sahlen crew did an fantastic job in quickly repairing the RX-8 by replacing the oil line. And Team Driver John Edwards was able to jump in and get the car back on track.

Once back on track, the decision was made by bring John into the pits and place Wayne back behind the seat. This was done to gain valuable Bob Akin Sportsman Award points.

“In the end the race was about a lot of what if’s. But this is racing. And if you are not prepared to have one of these days, then you don’t need to be racing. The part failure was a fluke break. It must have come from a stray car part on track, or one of the many sharp stones that are surrounding the track. The good news is that it wasn’t a part failure or a preparation issue with Team Sahlen. We were able to come back after Road America and prove our pace there was not a fluke. And the additional good news is that we don’t have to wait long to get back on track and put this race behind us. We are at New Jersey in just 2 weeks.” – shared Wayne Nonnamaker