Team Sahlen sizzles it up in New Jersey heat

Team Sahlen entered the 9th round of the Grand American ROLEX Sports Car series at New Jersey Motorsports Park knowing the event would be a hot and muggy weekend. And hot and muggy it was. Temperatures on Friday and Saturday were in the high 90's with a heat index above 110. Instead of just be a race weekend with an Endurance race, the weekend itself became a test of endurance. This not only included testing the endurance of the drivers and the trusted Mazda RX-8s, but as well the full Team Sahlen crew. Even while constantly drinking, individuals faced the dire potential of becoming dehydrated.

During the early Practice Sessions of Friday and Saturday, Team Sahlen's #42 Mazda RX-8 hung solid in the top 5 in GT, driven by the capable hands of John Edwards and Wayne Nonnamaker. Constant set up changes directed by lead Engineer Catherine Crawford Wallace led to ever improving speed and driveability. These changes came to fruition during the Qualifying session, when John Edwards leaped to the front of the pack, placing the #42 on pole position. The pole position marked the 2nd pole in 3 races and the 3rd straight front row starting spot for Team Sahlen. Additionally, this acheivement marked a milestone for the team in recording their 40th all time top pole position. 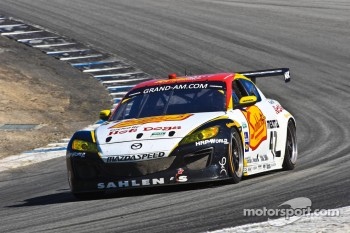 "John drove a fantastic lap. I know that we caught a lot of people off guard in the paddock with that run. I am so happy for the guys. They worked so hard to recover from a rough race at Mazda Raceway - Laguna Seca. They never let it get them down. And here we are on the front row again." - shared Team Manager Jay Chapman

Will Nonnamaker achieved his best time of the weekend in placing the #43 RX-8 in 12th spot on the grid - "It was like a Formula One qualifying session, with everyone taking off laps to cool off their tires. Then even when it seemed like you had a clear lap, someone was spinning off the track, and that happened twice to me in this session alone."

At the start of the race, John Edwards took the cautious approach to the start and settled in a 2nd in class behind the hard charging Boris Said in the #31. Will Nonnamaker also took the same approach. Unfortunately for Will though, this approach was not enough, as he was knocked off the track by very aggressive Daytona Prototype. To be exact, to use the exact words of the SPEED TV announcers, "Will Nonnamaker was clobbered from behind".

John continued to maintain his slot in 2nd and eventually progressed around the Boris Said to climb up to 2nd place. Wayne Nonnamaker jumped in to fill in the middle stint of the race.

"It was very hot out there. I had some really close racing with the #70 SpeedSource Mazda RX-8 driven by Sylvain Tremblay. We had some really great nose to tail action fighitng it out for 1st place. Even after the pits stops were over and John had got back in, the two Mazdas were only seperated by a few seconds." - shared Wayne Nonnamaker

As the race progressed, a full course caution at the 35 minute mark saw the entire field bunch up. When the race went back to action at the 25 minute mark, John Edwards was placed in 2nd place, just behind the #70 Mazda driven by Johnathan Bomarito. John threw everything he had to pursue and potentailly pass the #70 machine. In the end, at the checkered, less than one second seperated the Rotary duo. This delivered Team Sahlen their second 2nd place finish in 3 races.

Additionally, Joe and Will Nonnamaker continued to split driving chores during the race. The duo never were able to recover from the early race altercation with the Daytona Prototype, and at the end of the race settled for 11th place.

The end result of the race saw Mazda sweep the podium. This fine result vaulted Mazda to the lead in the Manufacturer's Championship. The 2nd place finish further secured the #42's position in the Top 10 in GT Team Point Standings. And additionally Wayne Nonnamaker secured the Bob Akin Sportsman Award again, further solidifying his position at the front of this prestigous award.