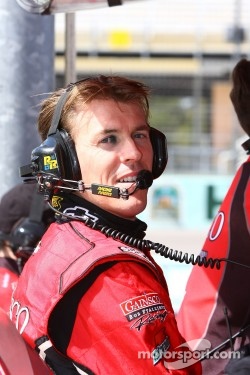 The GRAND-AM Rolex Sports Car Series presented by Crown Royal Cask No. 16 and the Continental Tire Sports Car Challenge will participate in a pair of races (July 27) during the July 26-29 event, joined by the NASCAR Sprint Cup Series and NASCAR Nationwide Series.

“It’s very special to be taking my first laps at Indianapolis, 41 years since my dad last drove here in a race,” said Alex Gurney, part of one of six teams participating in the two-day session. “I’m very happy that GRAND-AM made the move to come here.”

Gurney drove the No. 99 GAINSCO Auto Insurance Chevrolet/Riley that he shared with Jon Fogarty in winning the 2007 and 2009 Daytona Prototype championships. Fogarty tested that car in GRAND-AM’s only prior outing at Indy, in 2009.

Gurney enjoyed the feeling driving through Turn One of the famed 2.5-mile oval – running in a different direction on the sports car layout – although he found the front straight a lot different than he envisioned.

“Watching Indy on TV all through the years I thought the front straight was really wide,” Gurney said. “It doesn’t feel that way in a race car. It’s a lot narrower than I expected, and feels closed in and tight. That’s something I didn’t expect.”