Team Sahlen secures Akin Title, and comes close to Victory
Team Sahlen came into the last event of the season at Mid-Ohio Sports Car Course, with many goals to achieve:

-Win Mazda the GT ROLEX Manufacturers’ Championship
- Win the GT race, to secure a victory for the year
- For Wayne Nonnamaker to secure the Bob Akin Sportsman Award in the GT Class 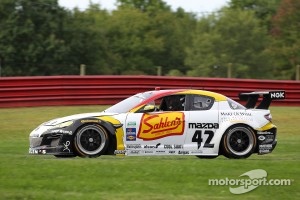 To prepare for the event, Team Sahlen went to Mid-Ohio a few weeks for the event for some extra track time. This two day test assisted the drivers in reacquainting themselves with the track.

“Getting to test at the track ahead of time was very important to assist all of the family to knock off the rust around the twisty Mid-Ohio Sports Car Course.” Shared Joe Nonnamaker

At the start of Practice Session #1, Team Sahlen firmly placed themselves as the team to beat for the weekend, with John Edwards firmly placing the #42 RX-8 in the top spot on the GT sheets. Then Wayne Nonnamaker backed up this pace, with a Top GT time in Practice Session #3. In Qualifying, what would normally be a 15 minute session, turned into a very short 3 lap shootout, as a spinning GT competitor brought out a black flag, ending the session early. Despite this short time frame, Wayne Nonnamaker secured 5th place on the grid, only a tenth off the best Mazda time set by the #70 racer of Sylvain Tremblay. Additionally, Joe & Will Nonnamaker qualified the #43 & #49 Mazdas in 15th and 16th respectively in the full 20 car GT field.

The start of the race disturbed by an early yellow flag caution. The #42 Mazda choose to stay out on track, while the #43 and #49 choose to dash to the pits for a splash of fuel. This splash of fuel was useful and but costly for Team Sahlen. While the fuel would assist Joe Nonnamaker being able to extend his fuel tank later in the race, the stop put Will Nonnamaker behind the #30 Mazda on track.

“Racing is always a game of could haves and should haves, but looking back, I wish now that we would have stayed out,” said Will. “I never expected the #30 would be such a difficult car to pass. After the restart, he did his best Michael Schumacher imitation. Not only did he weave to the inside, but then he would weave back to the outside. At one point I was alongside him on the front straight, and he decided to drive me towards the pit wall. IN the end his weaving is what did us in. Going down the straight to the key hole, he weaved to the right to block, then as I went to the left to try and pass him on the outside, he weaved back left. Of course he didn’t plan for Dempsey to be on the inside of him, so he immediately jerked the wheel to the right to block him, which resulted in all three cars being involved in an incident. This unfortunately put us out of the race. A rather small consolation after the fact was Grand American actually parking the driver after his four altercations in less than 45 minutes of driving!”

With another caution on lap #27 (that was brought out by the second driver in the #30 race car), Team Sahlen choose to pit both the #42 and #43 to change drivers. John Edwards jumped into the #42 RX-8. Wayne Nonnamaker did not have much time to regroup himself, as he jumped out of the #42 and immediately replaced his Dad, Joe, in the #43.

As the race went back to green, Team Sahlen quickly moved up the charts, with the #43 & #42 in a solid 3rd & 6th place respectively. On the 63rd lap, a problem arose for the #10 Daytona Prototype as it left the pits. The car would not restart, and sat at the exit, on the pit road exit. A quick strategic decision by Team Sahlen saw the #42 directed into the pits, before the yellow flag came out. This decision saw Wayne leapfrog the competition from 6th to 3rd after the full course caution pit stops shook out. During this yellow flag caution, #42 had risen to 1st in the GT class. A misunderstanding with race control, saw Team Sahlen staying out, awaiting a wave by. Unfortunately, the wave by was not able to occur, and this forced the #42 to pit out of sequence, putting it down the order in 8th place.

Wayne resumed the race in 3rd place. And when the #69 Mazda went slightly off track, the #43 moved into 2nd place. Unfortunately, the #69 wanted his position back rather quickly, and forced his way on the track, and caused Wayne’s right rear tire to go flat. John Edwards continued to battle back. During his charge to re-catch the pack, John pulled off the Fastest Race Lap for the GT class. Thus ending Team Sahlen's season with two 2nd place finishes, 2 Pole Positions, and 2 Fastest Race Laps.

In the end, Team Sahlen preserved to a 6th and 10th place finish.

“It was a very exciting race,” said Wayne. To have both our Team Sahlen Mazdas in the Top 3 competing for the victory was great. It is a testament to the fortitude and dedication of the crew that we could place 2 cars at the front. It would have been fantastic for Mazda to have won the Manufacturer’s title. Mazda finished 2nd in the race, but it just wasn’t quite enough. Personally, winning the GT Class Bob Akin Sportsman Award is fantastic. I am at the exact same age as my brother Will was when he won the inaugural award in 2005.”

As a conclusion to the season, Team Sahlen secured 8th place in the ROLEX GT class Team Championship, placing them in the 2012 Continental Pacesetter Program.