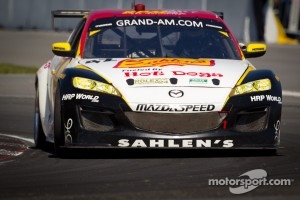 Team Sahlen continued their streak of competitive runs in the Grand American ROLEX series at the 11thRound at Montreal. Right off the trailer, Team Sahlen’s set up was very close. In Practice Session #1, #2, #3 & #4; Team Sahlen set the 2nd Fastest GT time. And then in a very tight Qualifying Session, Wayne Nonnamaker placed the #43 in 5thplace on the GT grid.

“After the practice sessions times, we were hoping for big things come Qualifying. But a couple of items out of our control put us behind the 8 ball. And with how competitive the GT field is these days, you have to be completely on top of your game to get to the front. Still, 5th place is nothing to sneeze at, and were happy to be so close to the front.” – shared Wayne Nonnamaker.

The race started without any incident. As the race paced through the 1st30 minutes, there were several incidents and spins on track for both Daytona Prototype and GT cars. But none of these incidents were enough to cause a full course caution. With the race being a short 2 hour event, several GT teams were playing the odds on an early yellow, and choose to short pit. Team Sahlen instead choose to run to a fuel cut. This strategy enabled the #42 to leap to the lead before pitting. Additionally, it also allowed the team to be able to run longer into the next stint. The strategy was very beneficial. As the race wore on, John Edwards brought the #42 in for its final pit stop. All was looking well, until the rather large curbs caught out the Mazda, breaking the rear sway bar. John did an incredible job holding on to a 6th place finish with the wounded RX-8

Team Engineer Catherine Crawford Wallace commented on the weekend - “We had a fast car, posting P2 in every practice session. Unfortunately in qualifying we had some brake issues and ended up 5th. In the race, the car was showing well through Wayne’s stint and when John got in he was posting fast times until the rear anti-roll bar broke. John then had to do what he could with a car that just didn’t want to turn. We ended up 6th but hope to take the speed of the car to Mid-Ohio.”

John Edwards added - "After getting knocked out of contention by DP traffic at Watkins Glen, we were looking for some redemption at Montreal. While we expected the V8s to be fast at this track just like they were last year, we proved we had pace through the practice sessions, posting the 2nd fastest time in a few of the sessions. However, we fell back a little bit in the race and I was pushing very hard to catch the leaders, but apparently I pushed a little too hard by using the curb in the final chicane every lap. Eventually, the car couldn't take landing off of the very high curb, and the rear anti-roll bar broke. This caused a massive understeer and caused my lap times to drop by about a second. While we could have remained in 5th place until the end of the race despite the damage, a late race caution bunched up the field and I dropped to 6th before the checkered. It was really a shame to end up P6 after showing good speed in the practices and early and middle parts of the race, but we salvaged some points for Wayne in the Akin championship despite a broken rear bar."

Team Sahlen had also entered the #43 RX-8 for drivers Joe & Will Nonnamaker. At the end of the race, the #43 finished in 12th place in GT

“At the start of the 1st Practice, we had a bit of a rub in the right rear, left over from an incident at the Watkins Glen race. The crew spent a lot of time in the Morning session working to diagnose the situation. This put both Dad and I a bit behind in re-learning the nuances of this street circuit. Thankfully, we were at least able to use the set up changes that were put on #42 to our Mazda just before the race. It’s always a bit worrisome to put a set up on the car before driving it in the race. But it really worked out, as both of our times came down in the race. In fact, I was able to improve my best lap time by over 1.3 seconds.” – shared Will Nonnamaker