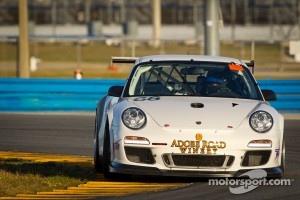 Petaluma, CA (December 19th, 2011) - The Racer's Group Ben Keating will take the green flag of all three events in the newly announced GRAND-AM Rolex Sports Car Series Endurance Championship. It will be a three-race championship within a championship in the 2012 Rolex Series. Ben will compete for a GT class championship with his TRG co-drivers in a 2012 Porsche 911 GT3 Cup car.

This inaugural endurance series will begin with the running of the 50th anniversary Rolex 24 at Daytona on January 28-29, then carry over to the Sahlen's Six Hours of the Glen at Watkins Glen International on June 29-July 1. It will wrap up with the Series' debut at the Indianapolis Motor Speedway on July 27 for a three-hour race entitled "Super Weekend at the Brickyard" that GRAND-AM will share with NASCAR and its Sprint Cup Series.

Keating, fresh off of a championship in the highly competitive Dodge Viper Cup series, had an extremely strong showing in his 2012 TRG Porsche 911 GT3 Cup at the Rolex Series Daytona 24 December Test Days. Keating spent much of the second day at the top of the GT class speed charts. Keating will compete on not one, but two of the top TRG teams with a second car and be a serious factor with his teammates at the January endurance race.

"This is a unique opportunity to be a part of a really neat championship in a first-ever series of events" says Keating. "To race at such historic venues with GRAND-AM is going to be fantastic. I am confident TRG will put together a competitive package. We'll be aiming for the top of the podium at each of the three stages."

Keating made his TRG debut at the 2011 Rolex 24 at Daytona, running in the pole-sitting car with Lucas Luhr and Dominik Farnbacher. Keating also ran in the 2011 ALMS Petit Le Mans, finishing fourth in GTC class.

"Ben has proven over and over, that he can compete with the top-level pros and has really shown signs of brilliance as of late," said TRG team owner Kevin Buckler. He is on his game and he has really come into his own in these Porsche race cars. We’re excited to have Ben committed to this new format. These are some really cool tracks - and really awesome events!! We’re looking forward to getting started on the right foot in Daytona for the 50th anniversary running of the 24. Just wait till we announce the lineup!!"

Two of the three endurance races will be held in conjunction with the NASCAR Sprint Cup Series, providing an extraordinarily large stage for teams and sponsors competing in the championship. The sponsor and partnership opportunities will be limitless.

Keating begins his march toward the Endurance Championship Jan. 6-8 when he and his soon-to-be-named teammates participate at the "Roar Before the 24" at Daytona International Speedway along with four other TRG race cars in preparation for defense of last year's GT class victory.