Colombian driver of the year ready to defend Rolex 2012 24 podium.

Pataskala, Ohio – After making an impressive debut in his first-ever Rolex 24 At Daytona with a run to third place, Gustavo Yacaman is coming back for more.

In fact, the young Indy Lights pilot, who earned the “Colombian Driver of the Year” honor for his breakout 2012 season, will once again open his 2013 racing schedule with a run at the prestigious Rolex 24 At Daytona. 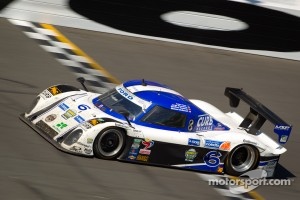 Yacaman will return to the same team he made his strong debut with, defending race champions Michael Shank Racing.

The 2013 race will mark Michael Shank Racing’s 10th Rolex 24 event - the team having made its GRAND-AM debut in 2004 with a fourth place class finish in MSR’s first start in DP competition.

Last year’s run was all the more remarkable given that Yacaman was racing in an old “Generation 2” Daytona Prototype.

“Coming back is very good,” said Yacaman, who enjoys training and kiteboarding to keep sharp between races. “It’s great to have the new Riley and hopefully have more speed this year with the 3rd generation DP.

I know all of the team guys already and it’s not like a new experience all over again. I think there is a good vibe among everybody on the team.

The 60 car won last year and we finished third so I think we can repeat that this year and hopefully flip it around – and we get the win this year!”

Testing for the race, set at the beginning of the month, saw Michael Shank Racing set the fastest time in five of the eight practice sessions, with the No. 6 Ford-Riley that Yacaman will drive in the 24 nabbing the quickest time of the test.

Team owner Mike Shank has long looked for drivers with experience when picking out his Rolex 24 roster, so the youthful group that included Yacaman in his 2012 line up was a bit of a change of pace, but it turned out to be a great decision.

“For such a young group of guys, Gustavo and the rest of the 6 car drove like guys with a lot of experience last year and we are expecting more of that from them this year,” said Shank.

“Keeping out of trouble is so crucial to being there to fight for a podium on Sunday afternoon, and these guys get that so we have high hopes for next weekend.”

Castroneves: Pagenaud will help put MSR “on the next level”