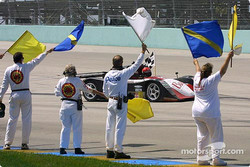 Tillman and Francois both rode in Archangel's second Nissan Lola, which the team decaled to look like the #21 Budweiser/GreyEagle.com car that was involved in the fatal accident during Friday's practice session that took the life of Clinton. Tillman drove the Lola clockwise on the Homestead-Miami Speedway oval in a traditional memorial lap in the reverse direction of race traffic, while Francois rode in the Lola carrying a checkered flag.

During the Rolex Sports Car Series driver meeting earlier today, drivers signed the official Nextel 250 checkered flag, which will be given to Clinton's family. G&W Motorsports also provided 'In Memory of 21' decals, which the majority of the 34-car field will be displaying during today's race.