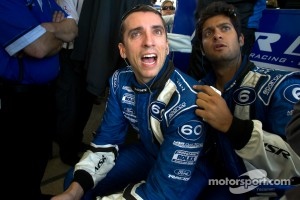 With the world watching, Michael Shank Racing with Curb/Agajanian made history as the team won the 50th Anniversary Rolex 24 At Daytona to open the 2012 GRAND-AM Rolex Sports Car Series season. Justin co-drove the No. 60 LiveOn Ford-Riley with John Pew, Ozz Negri, AJ Allmendinger to a 5.198-second victory at Daytona International Speedway.

Bolstering the storybook victory was the strong finish of the team’s sister No. 6 Ford-Riley DPG2 entry, which finished third. Michael McDowell, Felipe Nasr, Jorge Goncalvez, and Gustavo Yacaman fought back from two laps down to finish less than one minute behind the winning car after 24 hours of racing.

From the huge assembly of previous winning cars and drivers on hand, the biggest crowd in the event’s history, the debut of the new Daytona Prototype machines, a huge GT Class field, Sir Jackie Stewart calling the race start, and another Rolex 24 field deep with international talent, the race held high expectations. And with 49 lead changes among 53 drivers, a DP-era record 761 laps covered, and a battle that ran at an unrelenting pace right to the finish, the event fully lived up to those expectations as Michael Shank Racing with Curb/Agajanian won the race for the first time in the team’s history.

Ozz Negri qualified the No. 60 car sixth on the grid and the Ford-powered Daytona Prototype dominated most of the race, running in the top-three throughout the majority of the event and leading a total of 249 laps. For most of the race the No. 60 car was locked in a thrilling battle with the No. 8 Starworks Motorsport entry driven by Ryan Dalziel, Allan McNish, Lucas Luhr and Alex Popow which finished second.

Justin ran out front for a total of 92 laps, 83 of which came during a mammoth three and a half hour quadruple stint on Sunday morning, which saw him build a lead of more than 30 seconds. AJ led for 90 laps and Ozz for 67.

Both Michael Shank Racing with Curb/Agajanian cars ran a near perfect race, never going behind the wall for repairs as the Shank squad’s elaborate preparation for the historic event paid off in a big way. The race was the ninth outing in the fabled Rolex 24 At Daytona for the team, and the huge result was one that left fans, media, and even some of the competition roundly pleased as the team broke through on the biggest stage yet.

For Justin, twice runner-up in 2006 and 2010, finally taking receipt of a race-winner’s Rolex watch on his fifth attempt was a moment to relish.

“It’s a fantastic feeling to finally do it,” said Justin. “It was flat out. We gave it everything on every lap and took every opportunity. It’s just the way it had to be to compete with Starworks and we had to be on our game the entire time. I’m really pleased for Mike, the whole team and Ford. They’ve done a fantastic job, working hard and making sure we had all the bases covered and giving us the reliability we needed.”

“It’s just indescribable,” said Team Owner Mike Shank about the hugely popular win. “I don’t know what to say, I’m just so happy to be here - just thankful for the guys that do all the work for us, that hung in with us for those years and it all paid off today. 50th anniversary - it doesn’t happen but once. I always feel like I have to prove myself every step because I came from nothing more or less, and it’s because I've had great relationships with people like Ozz and John Pew that have really taken our business to another level.”