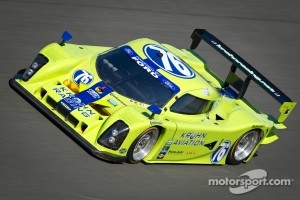 The No. 76 Krohn Racing Team is set to hit the track for the 50th Anniversary of the Rolex 24 at Daytona.

The depth of talent on the Krohn Racing team will be put to the test in the famous twice-around-the-clock enduro race at the 3.56 mile, 12-turn Daytona International Speedway road course on January 28-29, 2012. Krohn Racing Team Owner/driver Tracy W. Krohn, a gentleman driver with eight years racing experience who has taken his team around the world racing, has assembled a lineup of expert co-drivers to take on the formidable challenge: Nic Jönsson, Colin Braun and Ricardo Zonta.

Krohn Racing’s 2012 driver line up previously achieved their best Daytona finish of fourth places in 2008 and in 2010. With a fifth-place finish in 2006 and sixth-place in 2011 the team remains hungry for a podium finish. All four Krohn drivers have stood on the podium at the 24 Hours of Le Mans. The Krohn Racing Team will compete in their seventh Rolex 24 at Daytona, racing every year since their formation in 2006.

How did the Daytona Test go for you guys earlier this month? Do you feel ready for race week? “We feel we had a good test and are ready for the race this week. No doubt there are always things in a 24-hour race that you can’t prepare for but we have competed at Daytona many times and come to the race as ready as a team possibly can be.

What is the competition going to be like this year and what do you expect your challenges to be? “Traditionally this is always a difficult race. Anyone can win. You just never know. There are so many factors with traffic, weather, driver’s experience, or lack of it, that can play into the results of the race. Ganassi has been tough to beat in this event and they’ve had a lot of success so that gives them an advantage. But it’s anyone’s guess on the final outcome.”

You have stated that you are glad to have the same group of drivers with Tracy, Ricardo and Colin, back for the Rolex 24 this year. What makes this such an ideal team of drivers? “First of all, we all get along great. We’re friends, and that’s important. Secondly, we all like a similar set-up on the car. We don’t have one guy out there that really doesn’t fit well with the consensus of the set-up for the other three. It’s important that we can all comfortably drive the car because we’re each going to be spending a lot of time in it. We all respect one another and do our best to drive with consistency and at a pace that’s fast enough and without risk because we have to bring the car in each time and have a good pit stop if we’re going to win the race.”

How did the Daytona Test go for you guys earlier this month? Do you feel ready for race week? “Yes, we had a good test and accomplished the things the Team had planned to evaluate. We each got seat time in the car but could not achieve times we had previously run. This has now been addressed and we feel we have a realistic shot at the podium. Our car perhaps has never had the raw speed at this track but we have a good strategy and reliability. The 24-hour race is always challenging, and will be especially so this year with all the GT cars out there. With the 50th anniversary there are more cars to make it interesting and more challenging.”

Swedish-born Nic Jönsson, a Scandinavian Formula 3 and Swedish Touring car driver, who came to the United States in the late 1990s to pursue an open-wheel racing career, is Krohn’s long-time teammate and coach. Jönsson has numerous wins in Grand-Am and captured the Continental Tire Sports Car Challenge Driver’s Championship last season, as well as runner-up in the Intercontinental Le Mans Cup GTE-Am class with Krohn

The Krohn Racing driver line-up includes you, Tracy Krohn, Nic Jönsson and Colin Braun. How do all of you work together as an endurance driving team? “The strategy makes the difference in an endurance race. I believe David Brown’s race strategy can make the difference for us in this race.”

Brazilian Ricardo Zonta will compete in his fifth Rolex 24 with Krohn Racing and came to sports cars after a success racing career in Formula 3, Formula 3000, FIA GT and Formula One. Zonta and Krohn Racing Team Manager/Race Engineer David Brown previously worked together in racing. Since 2007 Zonta has fielded his own team and driven in the Brazilian Copa Nextel Stock Car Series. 2012 will mark Zonta’s fifth consecutive appearance at the Rolex 24, all with Krohn Racing.

This year’s Rolex 24 will be your eighth Daytona 24-hour race, and you’re only 23 years old. How did you do that? “Well, my first time competing in the Rolex 24 at Daytona was when I was 16 years old. I was teamed with a couple of other 16 year olds and we called ourselves “Team 16”. I know it’s not real original but it stated who we were. We raced in a Porsche 911 GT car and finished seventh in class. That got us all some attention and I signed to be a driver for Tracy Krohn for the full 2006 season later that year. I’ve raced the Daytona Prototypes since then.”

You, Nic and Ricardo all grew up in racing and started in go-karting. How did that help? “For me, it taught me all the basic driving skills. On top of that, because my Dad was a Race Engineer, my brother and I had lots of trick things on our go-karts, like telemetry. I started racing karts at age six and from an early age, I learned how to read data and give feedback. That’s something that most young kids in go-karting don’t get to do, but I did. It has paid off when working with Krohn Racing where the Team soaks in all the feedback from the drivers and comes back to give you a better car based on that feedback.”

Colin Braun, who has made a splash as a young gun of NASCAR in recent years, returns to his sports car racing roots and “family” with the Krohn Racing Team for the Rolex 24. Braun was signed as a youngster at the age of 16 by Tracy Krohn to drive in the professional Grand-Am Rolex Series in 2006. Braun captured two Daytona Prototype victories that season and stood on the podium at the 24 Hours of Le Mans, the youngest ever to do so. He added more sports car victories before moving into NASCAR, where he has one victory and numerous Top Five finishes in the Nationwide and Truck Series. This will be Braun’s fourth appearance at the Rolex with Krohn and eighth total Daytona 24 competition, his first when he was 16 years old.

The Team has its driving line-up from 2010 back for 2012 – with Tracy, Nic, Ricardo and Colin. Why does that driver combination work so well and how does Krohn Racing attract such high caliber drivers? “There is no substitute for good drivers. All the drivers know each other now, there is a great atmosphere among them, a sense of camaraderie and they work well together. Continuity in this sort of competition is very valuable. We have a wide range of backgrounds – all focused on one thing for the Daytona Race. It is important to have the best driver. One mistake in the 24 hour race in traffic can completely change the shape of the race for the team. And these days, more than ever, with the race managed to put so many cars on the same lap in the last few hours, we need to be fast, and we need drivers who will drive the car the limit of its performance potential.”

Krohn Racing is the only race team currently expected to compete in both the 24 Hours of Daytona and the 24 Hours of Le Mans in 2012. That is a very special designation. Please share your thoughts about that and what it takes to be successful in a 24-hour endurance race. “They are two very different events but with many parallels. It’s still a battle with the other cars and against the elements and an exercise in both restraint and risk management. They combine the need for good design and thorough preparation with car and team management, efficient use of resource and the ‘unexpected’ thrown in to keep us on our toes. Although we are an organization small in number we have a great depth of experience across the range of disciplines involved. There is the constant balance of technology and complexity against the benefits they bring. Although both races are part of Championships they stand alone in their respective arenas as truly challenging events.”