Lime Rock: Carter and Plumb put another CTSCC season in the book

After five races and only one top ten to cheer them up, Al Carter and Hugh Plumb realized that the gods of racing were not in their camp for the season.

Last Saturday Al Carter crossed the finish line of his 39th Continental Tire Sports Car Challenge race of his young racing career in 13th place. Carter was hoping for a much better result but an early problem with a tire during Hugh Plumb's stint and a last minute pit stop for a splash of fuel prevented Carter and Plumb to finish in the top five as they expected. 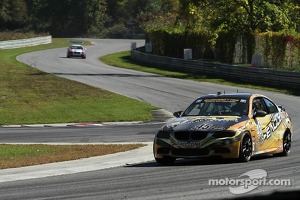 The 2013 season has been a tough one for Al Carter and Hugh Plumb who really anticipated this fourth season of racing together as the one in which they would get the ultimate result. Nevertheless both drivers tried their best but after five races and only one top ten to cheer them up, they realized that the gods of racing were not in their camp for the season.

The two scored an encouraging podium finish at Watkins Glen but not the championship nor even a win like they secretly dreamed of between the end of the 2012 and the 2013 season.

Al Carter and Hugh Plumb started to race together in 2010 with Stevenson Motorsports and joined Fall-Line Motorsports in 2011. Last Saturday marked their 41st race together in the Continental Tire Sports Car Challenge and Rolex Series combined. If they did not achieve their goal of winning a championship like they wanted to do when they joined, Hugh Plumb and Al Carter scored bigger than that with their B+ Foundation racing program.

In three seasons the two drivers and The B+ Foundation raised a lot of money and visited over fifteen national children's hospitals to make a difference in the lives of children battling childhood cancer. Last Thursday marked the last 2013 event of their "B+ Racing Fighting Childhood Cancer Tour" when the two B+ Ambassadors visited the Connecticut Children's Medical Center in Hartford.

The Lime Rock Championship weekend presented by BMW was a short event and included only one practice session and qualifying. On Friday afternoon Hugh Plumb qualified 4th which was really encouraging for the race. Saturday morning when the green flag waved, Hugh took a great starts and right away was running in top three. After only 15 minutes a tire problem slowed down his effort and Hugh had to finish his stint in fifth place thinking that he had a shock problem which was not the case.

When Al found himself behind the wheel he started to pass cars and come back in the top Carter ran well, as high as 2nd on lap 93 before the second of two programmed pit stops. Ten minutes before the end Al was in the top ten and unfortunately was called by the Fall-Line engineers to the pits for a splash and go since his 45 BMW was running out of fuel. Al stopped and lost some precious positions and crossed the line for the final time this season in 13th place.

Al Carter was also racing this weekend in the final race of the Rolex Sports Car Series with the No. 46 B+ Foundation Fall-Line Audi R8 with co-driver Eric Lux. Al qualified 12th on Saturday morning. At the start Al got hit by another GT car that damaged the rear diffuser of his Audi so he had to complete the rest of his stint with no diffuser.

Eric Lux replaced him for his stint then he too got hit by a DP car and spun. The gearbox of the 46 Audi R8 was damaged in the incident so the team was forced to retire the car. Carter and Lux finished 12th.

The 2013 Continental Tire Sports Car Championship is already behind us but Al Carter continues his racing season. This weekend he will compete at VIR during the ALMS event in the Lamborghini Blancpain super Trofeo for the second time this season. He finished 2nd in the first of the two races in Kansas and won the second race. Al is anticipated to do well in Virginia on a track where he scored his first professional racing pole position in 2011during the CTSCC race.

The GRAND-AM Championship Weekend CTSCC presented by BMW will be broadcast on Fox Sports 1 (formerly Speed) on Sunday, October 6 at 5:00 PM ET.

More from
Hugh Plumb
IMSA Others