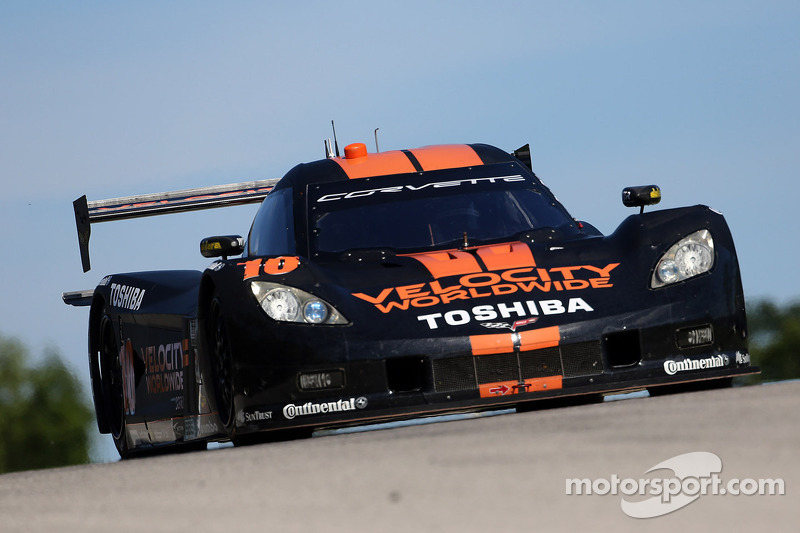 The 2013 final battles will take place this weekend for both the GRAND-AM Rolex Sports Car Series and the Continental Tire Sports Car Challenge.

Only one race remains on the 2013 GRAND-AM Rolex Sports Car Series schedule. The pairings of Jordan Taylor/Max Angelelli and Scott Pruett/Memo Rojas will lead the pack battling it out for the 2013 Daytona Prototype (DP) drivers’ title in Saturday’s season-ending Championship Weekend Presented by BMW race at Lime Rock Park.

Taylor and Angelelli won the two most recent races in Wayne Taylor Racing’s No. 10 Velocity Worldwide Corvette DP to enter the finale with an eight-point lead (304-296) over Pruett and Rojas, in the No. 01 TELMEX/Telcel BMW/Riley fielded by Chip Ganassi Racing with Felix Sabates.

History is on the side of Taylor and Angelelli at Lime Rock. Wayne Taylor Racing has been undefeated since DPs began racing at the circuit in 2010, with Angelelli joined by Ricky Taylor in all three victories. Meanwhile, Pruett and Rojas struggled each time at the tight 1.53-mile layout, with their best finish seventh in both 2011 and 2012 after a last-place finish following a first-lap crash in 2010. 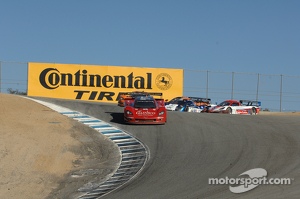 Should the leaders stumble, six other drivers are also in the hunt for the drivers’ championship.

Alex Gurney and Jon Fogarty, No. 99 GAINSCO Auto Insurance Corvette DP, have 293 points, followed by Christian Fittipaldi (291) and Joao Barbosa (289) in the No. 5 Action Express Racing Corvette DP, and Alex Popow and Ryan Dalziel in the No. 2 Popow Starworks Motorsport BMW/Riley.

Another title on the line at Lime Rock is the DP team championship. Chip Ganassi Racing with Felix Sabates currently leads the DP team standings by 11 points over Wayne Taylor Racing (315-304).

The titlists will be honored at the Rolex Champions Awards on Monday at Gotham Hall in New York City. 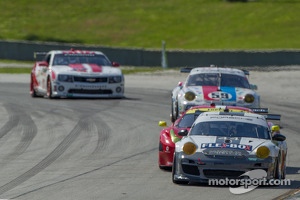 Andy Lally and John Potter and the No. 44 Magnus Racing Porsche GT3 team, hold a narrow four-point lead over Alessandro Balzan (313-309) and Scuderia Corsa entering the Lime Rock finale in the GT class. Lally and Potter scored their first victory of the season in the most recent event at Mazda Raceway Laguna Seca, while Balzan won two races ago at Kansas Speedway in the No. 63 Scuderia Corsa Ferrari 458 Italia.

John Edwards and Robin Liddell have a class-high four victories in the No. 57 Stevenson Auto Group Chevrolet Camaro, and enter the finale 11 points behind with 302 points.

Scuderia Corsa and Stevenson Motorsports both entered a second car for the finale. Johannes van Overbeek and Jeff Westphal will pilot the No. 64 Ferrari 458, while ALMS GT points leaders Jan Magnussen and Antonio Garcia will co-drive the No. 75 Camaro.

Jim Norman enters the race with an 11-point lead over Mazda driver Joel Miller (361-350) in the GX class, and can clinch by driving 30 minutes in the No. 38 BGB Motorsports Porsche Cayman co-driven by Spencer Pumpelly. BGB Motorsports will clinch the GX title with a third-place finish.

Marsh Racing of Old Lyme, Conn., will have a pair of area drivers at the wheel of the No. 31 Whelen Engineering/Team Fox Corvette.

Eric Curran is from nearby Holyoke, Mass., while current Californian Boris Said formerly lived in Stamford, Conn., where he developed his interest in racing while running a motorcycle shop.

This will be the final race for their Corvette in the GT class, with the team moving to a Corvette DP to compete in the Prototype division of the TUDOR United SportsCar Championship in 2014.

Turner Motorsport is from Amesbury, Mass. The team will have two cars in both the Rolex Series GT class and Continental Tire Sports Car Challenge GS class this weekend. In the Rolex Series event Michael Marsal, of nearby Bedford, N.Y., will co-drive the No. 93 BMW M3 with Tom Kimber-Smith, with Bill Auberlen and Paul Dalla Lana in the No. 94.

Dalla Lana and Auberlen return in the team’s No. 96 BMW M3 for the CTSCC race, and will be joined by the No. 97 for team principles Will Turner (Newburyport, Mass.) and Don Salama (Somerville, Mass.) 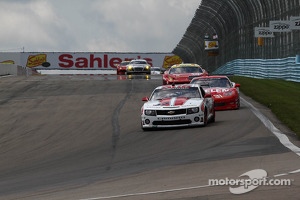 Robin Liddell and John Edwards know a bit about winning at Lime Rock Park – they’ve each won two races at Lime Rock Park, and at least one of them has been atop the GT podium for the past three years.

Liddell and Edwards will defend their GT victory at the 1.5-mile circuit on Saturday in the No. 57 Stevenson Auto Group Chevrolet Camaro. Liddell also won for Stevenson in 2011 – joined by Jan Magnussen – while Edwards teamed with Adam Christodoulou for SpeedSource in 2010.

Magnussen also will return to the team for Saturday’s finale, joining Antonio Garcia in the No. 75 Camaro. The GM factory drivers won last weekend’s GT class in the ALMS race at Circuit of The Americas, taking the lead in the championship in the process.

Stevenson team manager Michael Johnson also has a knack for winning at Lime Rock. His Archangel Motorsports won in SRP II in 2000 and swept both races in 2001 – with Andy Lally among his winning drivers.

· TRG returns the No. 66 Aston Martin Vantage for its second outing. Damien Faulkner – ALMS GTC winner at Circuit of The Americas – will co-drive with Aston Martin with factory driver Richie Stanaway.

· Bob Doyle of Meriden, Conn will be racing near his home this weekend, co-driving the No. 18 Muehlner Motorsports Porsche GT3 with Kyle Marcelli, the ALMS PC winner at Austin.

Another major step toward the revitalization of North American sports car racing in 2014 took place on Sept. 12 when TUDOR was named entitlement partner for what will now be known as the TUDOR United SportsCar Championship.

TUDOR, an innovative and retro-chic watch brand owned by Rolex, was established by Rolex founder Hans Wilsdorf in 1946.

The TUDOR United SportsCar Championship extends ties of the prestigious Swiss watchmaking market to premier U.S. sports car racing dating back to 1959, when NASCAR Founder and IMSA Co-Founder Bill France Sr. and Rolex formed their initial relationship. Rolex will continue to serve as Title Sponsor of the annual Rolex 24 At Daytona, and Official Timepiece at Sebring International Raceway and the Mobil 1 Twelve Hours of Sebring Fueled by Fresh From Florida.

Down To The Finish: 12 Drivers Vie For ST Title

There’s a logjam near the top of the Street Turner point standings that will be resolved in Friday’s season finale at Lime Rock Park.

Mike LaMarra and Terry Borcheller enter the event with an eight point lead over Ryan Eversley and Kyle Gimple (242-234) in the drivers’ championship. The math is simple: Borcheller and LaMarra will wrap up the crown by finishing fourth in the No. 23 Burton Racing BMW 128i. Or, Eversley and Gimple can clinch by winning and the Burton duo finishing no higher than fifth.

If both leaders have problems, then it gets complicated.

Tyler Cooke and Gregory Liefooghe, drivers of the No. 81 BimmerWorld BMW 328i, have 224 points. Both Rhett O’Doski and Andrew Carbonell (No. 25 Freedom Autosport Mazda MX-5), and Seth Thomas and Dan Rogers (No. 82 BimmerWorld BMW 328i) have 220 points. Jesse Combs and Jeff Mosing (No. 56 RACE EPIC/Murillo Racing BMW 328i) have 216 points. Combs and Mosing entered the most recent race at Mazda Raceway Laguna Seca in a three-way tie for the lead.

Close races and dramatic finishes are nothing new to the ST class. Consider that BimmerWorld’s Thomas and Bill Heumann entered the 2010 season finale with a 19 point lead. They experienced problems on the second lap and lost 30 minutes in the pits. The points lead shifted lap to lap down the stretch, with Lawson Aschenbach and David Thilenius eventually winning the title on a triple tie-breaker.

Borcheller finished 2004 tied for the GS championship, but lost on a tiebreaker to Craig Stanton. A three-time Rolex Series champion in DP, SRP II and GT), Borcheller is looking to end the GRAND-AM era with his first CTSCC title.

As a result, Rum Bum Racing will win its second-consecutive team title when the No. 13 Billfish Foundation/Rum Bum Film and HD Studios Porsche 997 takes the green flag at 9:50 a.m. ET Saturday. The drivers title would be clinched when either of the drivers complete 30 minutes.

Matt Bell and John Edwards are the only other drivers eligible for the title, but they would need to win in the No. 9 Stevenson Auto Group Chevrolet Camaro and have the Rum Bum drivers score zero points.

· The CTSCC has one Connecticut driver in Friday’s ST race, Adam Burrows of Canton co-drives the No. 76 Compass360 Racing Honda Civic Si with Ray Mason.

· Charles Espenlaub will drive his in his 100th CTSCC race – fourth on the all-time list – when he takes his turn in the No. 48 Fall-Line Motorsports BMW M3 Saturday.