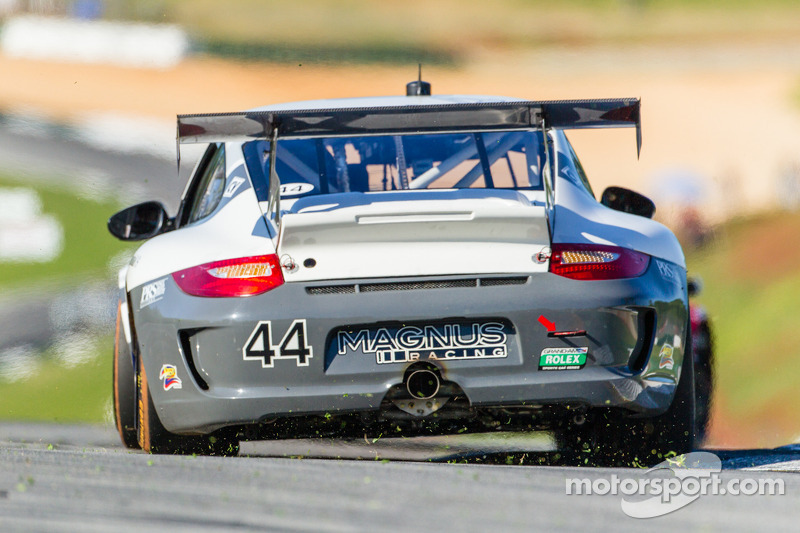 Lexington, Ohio. Magnus Racing left the Mid-Ohio Sports Car Course after GRAND-AM Rolex Series qualifying yesterday frustrated with an 11th place qualifying effort, last on the GT class grid. They leave the track after today’s Diamond Cellar Classic elated with a second-place finish and the lead in the GT class point standings. A remarkable turn-around made only more so by a late race penalty to a competitor that moved the No. 44 Porsche 911 GT3 Cup car from third to second in the two-hour, 45-minute race. Porsche customer teams Park Place Motorsports, Snow Racing with Wright Motorsports and Muehlner Motorsports America took fifth, ninth and 11th respectively in the Lexington, Ohio round of the 2013 sports car racing season. 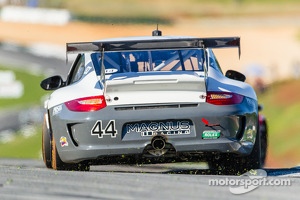 Magnus Racing’s No. 44 Porsche 911 GT3 Cup car struggled in Friday’s 15-minute GT qualifying session sending the defending North American Endurance Champions back to setup sheets last night. John Potter (Salt Lake City, Utah) started today’s race at the back of the class on an Ohio track known for its difficulty in passing. The owner/driver’s strong opening stint handed the car over to teammate Andy Lally (Dacula, Ga.) in prime position for the second half of the race. Lally, using pit strategy and smart driving, methodically made his way up into the top-three in the final 30 minutes of the race. The team then benefited from contact between eventual winner Bill Auberlen in the No. 94 Turner Motorsports BMW M3 and the No. 31 Marsh Racing Corvette of Eric Curran. When GRAND-AM race stewards deemed Curran’s contact avoidable, the Corvette was assessed a time penalty added to his final race time. The addition dropped Curran from the win to fourth in the final race standings thus moving Magnus up one spot to second place. The points award for the additional position was enough to move Magnus Racing back into the GRAND-AM GT point standings by three points over the No. 63 Scuderia Corsa Ferrari 458.

“We made up so much time in the pits,” said Lally. “We got out ahead of the other Porsches and had a good battle with the guys. We got lucky. Those boys got racy at the front and hit each other and went off and got penalties and we’re leading the points. I can’t say enough for John [Potter] and this crew for doing such a good job today.”

“We’re pleased to get a top five out of a difficult race,” commented Lindsey. “We had a good car but we got held up by traffic early on in my stint. I was able to hand over a really good car to Patrick [Long] but we had problems executing in the pits. They were small things otherwise I am confident we would have been on the podium. We’re excited to have a top-five for our friends at Park Place back in Dallas and our Children’s Tumor Foundation NF Heroes.”

The No. 38 BGB Motorsports Cayman driven by Dr. Jim Norman (Tampa) and Spencer Pumpelly (Atlanta) finished second in the GX class. As a result, the team continues to hold the lead in the class point standings.

The GRAND-AM Rolex Sports Car Series will now take one weekend off before traveling to Watkins Glen International in Upstate New York. The Six Hours of The Glen is scheduled for June 30th and marks the second endurance race of the season for the Rolex Series.