Max Papis talks about his relationship with Gianpiero Moretti 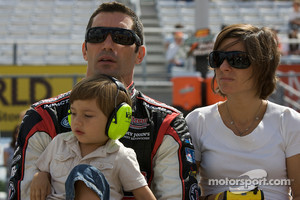 ABOUT MAX PAPIS: Max is one of the most versatile and accomplished race drivers in the world, a consummate professional who throughout his career combined natural talent, lots of hard work, focus, and sheer determination to win as he climbed each step, surpassing his limits and building an impressive résumé in the process. In 1996, fresh out of Formula 1, young Max Papis came to America and made an immediate impact in the driving circles when, at the end of a particularly tough Rolex 24 At Daytona and at the wheel of the MOMO Ferrari, he put on a very spirited, 'never-say-die' drive to chase the leaders, which earned him the nickname "Mad Max". It stuck, and he is still driving just like that. Papis made his INDYCAR debut in 1996 and collected 3 wins. He made his NASCAR debut in August 2006, competing in the Sprint Cup, Nationwide and Camping World Truck series.

When did you meet Gianpiero Moretti for the first time?

Tell us about your racing relationship with Gianpiero Moretti.

MP: "Obviously in 1996 I ended up driving the MOMO Ferrari and Gianpiero and I raced together all the time. He paid my salary. I was racing for Gianpiero and I talked to him all the time and he was my team owner. He owned the car and he owned the team that I drove for. That was the MOMO Ferrari, and we built a very special relationship. It was like a "father-son" relationship more than a teammate, relationship in a way. It was a unique thing because we were both Italian, we were both in America, we were both very unique people and Gianpiero was obviously older with a younger guy and I kind of felt that Gianpiero saw a lot of the young Gianpiero in me in a way. You know, I was kind of crazy, and I was always on the limit on everything I did. I was always a straight-shooter, on a lot of stuff and we built a very unique relationship in a way".

How difficult was it to get Gianpiero Moretti's confidence?

MP: "I still have a very clear memory, when I arrived in Daytona in 1996, Gianpiero really didn't know me at all and he really didn't want me to drive the car very much because he had this concept that having an open-wheel guy in the car I would have gone too fast, I would have broken the car, or whatever. I remember every test, every practice that we did, I was all the time ready with my fire suit on and everything and they never put me in the car. Gianpiero drove quite a bit, I remember, Didier drove, but me, because I was the younger guy, they put me in the car just to run a few laps and that was it". 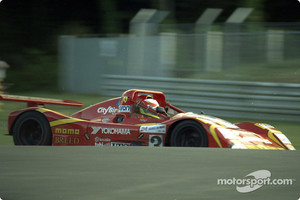 "In one way I was kind of disappointed about it because I didn't know how sports car racing worked because every time I drove in a Formula 1 car I was the guy in the car, I didn't see the car driving without me. So it came down to the last 3 hours of the Rolex 24 At Daytona and it happened that it was my turn at driving and Gianpiero said 'We are a few laps down, we have nothing to lose, we'll put Max in the car and see how things are.' I started doing really fast laps, really special things, passing people and doing a lot of stuff and I remember my last pit stop with Gianpiero and we were in the last pit stall and I remember looking at Gianpiero and he was chewing up his Toscano and spitting it right on the side there and after the race a few of my friends were there, right after the race as soon as I did my last pit stop, Gianpiero spit his Toscano down after he chewed it all up and he said, 'Aah, this guy's going to break my car in half.' So that was the beginning or our story race car driving. In one way, I owe my name to Gianpiero because we shared a car almost all year long, him and me. Gianpiero obviously was a gentleman driver and when he went in the car he always gave me, you know sometimes the car was a little bit further back than it should have been and because it was further back I was able to make really special races moving from the back to the front like the one I did at Watkins Glen when we won the 6-hour race and those races where I was able to make spectacular passes and create a lot of attention is what made my name "Mad Max" in American racing."

But you got your name Mad Max in 1996 after the final laps of the race when you were trying to catch Wayne Taylor, correct?

MP: "Not in the final laps. Yeah, it was more in the last 3 hours of the race when we were making up a lot of ground and speed and nobody really knew who I was but that was the first time Bob Varsha started saying there are people known to write a new history in racing but Max is driving like Mad Max! After that, through the year, Barbara Burns, she was our public relations person and she worked with Gianpiero for many, many years. She was able to create a character around Mad Max and people embraced that name and it actually really represented my personality and I was able, as I said to you, because of circumstances, Gianpiero gave me the car and it was maybe 4th or 5th and I was able bring it back to the top to win the race. Those races really made my name. "

MP: "I was actually really disappointed about it. I was there with Gianpiero he called me up to do the 1997 24 Hours of Le Mans with Gianpiero and in 1997 I was in Le Mans with them when I was racing INDYCAR and I was really proud that he would finish 5th or 6th with the Ferrari. Obviously I was looking forward to being in the car in the Rolex 24 with him in 1998 and I thought that would have been the chance for us to win the race. But I think Arie Luyendyk had lined up some sponsorship and Gianpiero had to pay me to race and it ended up that I was not in the car and that was a big disappointment for me not to be with him. I was really ecstatic about him winning the race. I went down to the Winner's Circle and I kind of felt that I should have been there, but I wasn't, but I was there with him in my heart."

If you had 3 words to describe Gianpiero, what would they be?

MP: "I know that we talked about it quite a lot and I think that it was the pinnacle of his career in a way. I remember he told me that he went there 14 times before and he had never been able to win the race and I think it was a unique moment in Gianpiero's life and in his career and it was a moment that he had been looking for so many years and it was a unique thing. I definitely say that I almost never saw him as proud as on that day. He was really proud and happy when we finished the 24 Hours of Le Mans in 1997 and that was still a historic race. I don't know how many years that a Ferrari didn't finish the 24 Hours of Le Mans and we did a really good job but that Daytona win was pretty special."

You conducted some business with Gianpiero and helped him, take the MOMO steering wheel to the NASCAR Industry. Can you tell us about that?

MP: "Yes. Obviously there was a special relationship with Gianpiero, between him and me. He was the guy who helped me put my name on the map in America racing with that MOMO Ferrari. We still stayed in contact on and off and when I joined my NASCAR program around 2004, I basically came up with the idea of revolutionizing the steering wheels in NASCAR. When I decided who I wanted to work with to develop these new steering wheels the first thing that came to mind was working with MOMO. So I called the people at MOMO and we developed this new steering wheel and I'm proud to say that in the recent 4 or 5 years, Max Papis Inc. is the distributor for MOMO steering wheels in NASCAR. We won many NASCAR championships in the last years and I am very proud of that. Gianpiero was very proud when I told him we won NASCAR championships, he was ecstatic because he thought MOMO would never have been in NASCAR. We have a large percentage of the NASCAR market, close to 80% of the Sprint Cup market and something like that in general, it really makes me proud."

When was the last time you met with or had a conversation with Gianpiero?

MP: "Maybe 2-3 months ago I spoke with Gianpiero when I took my NASCAR to Monza. He didn't follow racing that closely anymore. He liked it. I spoke to him about my NASCAR adventure and everything. We talked about my kids. I just felt that he was proud of what I did in my life with racing and I remember that I made sure I told him that he was a big part of that and when I told him that, I knew that I touched his heart and he was really proud of that. Gianpiero and I talked about racing but usually we talked more about life, and he wanted to talk about women all the time!"

"I wrote on Twitter when Gianpiero passed away that a huge part of motorsports is gone. An era is gone with Gianpiero. He was an incredible man and he had a huge part, directly or indirectly in helping me be who I am! That face, of watching him chewing his cigar during my last stop in the Rolex 24 At Daytona is something that is planted in my brain and it will be there forever."