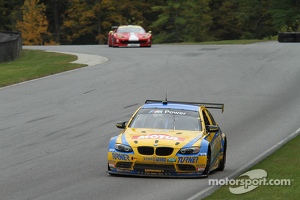 “I’m really glad to be back at Lime Rock,” said an excited Marsal before the race’s green flag. “Not only is this my home track, but it’s a circuit I genuinely love to drive, so it’s going to be great to be able to run two races here today.”

Teammate Tonis Kasemets qualified the No. 71 Multimatic Aston Martin Vantage and turned the car over to Marsal with an hour and a half left in the morning’s CTSCC GS race. Marsal re-entered the track in 11th place, and worked his way up to third in the middle portion of the race. As his tires began to go off at the end of his stint, Marsal had close battles with eventual race winner Billy Johnson, and GS season champion Matt Plumb who caught up using fresher rubber.

“Having been on the Rolex Series podium with Billy [Johnson], it was fun to be back to racing against him this week in Continental,” said Marsal.

After his final stop, Marsal reentered the race in 10th position, but the fast, caution-free nature of the event made it difficult to make up any ground on the track. In the closing stages, Marsal managed to gain two positions to bring the No. 71 Multimatic Aston Martin Vantage home in eighth place.

Marsal made quick progress starting from the back of the GT field, moving up four positions in the first two laps. After a long, early caution period, he continued to make forward progress, running as high as fifth before pitting to turn the car over to co-driver Tom Kimber-Smith. Kimber-Smith remained behind the wheel for the rest of the race, and managed to bring the car home in fifth place, securing Marsal’s third top-5 finish in the last four races, and marking a strong finish to the 2013 Rolex Series season.

“I’m really happy with how we finished out this season, with two podiums and a fifth place here at Lime Rock,” said Marsal, who has been a key fixture at Turner Motorsport since his breakout 2010 rookie season. “Thanks to Tom (Kimber-Smith) for coming and driving with us this weekend, and to the whole Turner Motorsport crew for all of their work over the past year. With the way this season ended, I’m already looking ahead to Daytona in January.”