Lakeville, Conn. (29 September 2012) – Michael Shank Racing with Curb/Agajanian had been hoping to return to the Lime Rock Park podium for the third year in a row as the GRAND-AM Rolex Sports Car Series staged the season finale race at the 1.53-mile Connecticut circuit. But those plans were dashed early in the 2.75-hour race when a lap 15 race incident cost the team precious laps to the field. 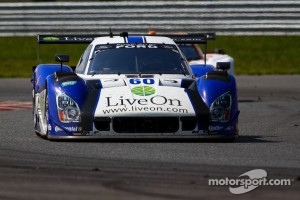 John Pew opened the race from eighth on the grid and almost immediately felt something amiss with the rear of the car, but powered on through the opening stages. While looking to settle into a race rhythm with the car, contact from the No. 7 Starworks entry saw Pew spinning off track.

With heavy rain on Friday having drenched the circuit, the No. 60 machine got stuck in the wet grass and the field passed by two times before Pew could be returned to the track. Fortunately, the incident didn’t prevent Pew from continuing on, albeit several laps down.

“The first stint, I don’t know if I got pick up on the tires or something because the car was really not handling well and was inconsistent,” said Pew, who won the Jim Truman Award once again. “I know the car was good – we had a good set up on the car so I don’t know what was going on. I just thought ‘maybe it’s the tires they’ll come in they’ll come in’ and they just never got in. It was a handful, but then the Starworks car hit me but I can’t blame him entirely because I was sliding all over the track.”

A subsequent full course caution saw the team move for an early driver change as Ozz Negri set off in pursuit of the lost laps. Negri gave chase, but the deficit was all too large despite him moving up from 21st to 10th overall.

With one more fuel stop remaining with just over an hour left to go, Pew returned to the controls to power the car to the final checkered flag of the 2012 GRAND-AM season.

“Ozz did a really great stint, but we were laps down so I got back in and got more seat time in the car,” said Pew. “I had fun-- I was keeping up with everybody and I was behind Scott Pruett at the end. A couple of cars were messing with him and I didn’t want to mess with a championship leader so I just stayed behind him most of the race and it was good. The car was good in that final stint, so I think there must have been a tire pick up issue. This wasn’t how we wanted to end the year, but it was a great start to the season and now everyone is looking forward to the future.”

“We were having a little bit of a problem with the car maybe John also had something going wrong on his first stint too because as soon as we changed tires, he was up there,” said Negri. “It is what it is. Once you are so far back there is nothing you can do. I still think it’s funny that the top-five positions were occupied by the five Corvettes. But we started the year well and I’m looking forward to next year.”

“Obviously loosing those two laps just killed us, so it was another good weekend that went bad,” said team owner Mike Shank. “We just wanted to end on a high note. John was behind the leaders and was able to hang right with them at the end. I just wanted him to get even more confidence and get ready for the winter and Daytona again where we know we’re strong. The season has been like this. Up and down. We’ve led a lot of laps we’ve been in the position to win four or five times and the podium six times. It’s bittersweet. I think there is a little curse of winning Daytona here, but we’ll go on and do it again.”

Thanks to all the fan and media support during the 2012 GRAND-AM Season. Michael Shank Racing is looking forward to announcing plans for 2013.