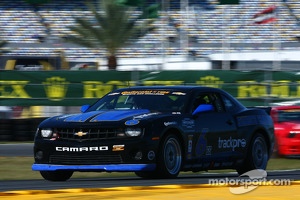 Lawrence Davey and Mike Skeen shared driving duties in the Camaro and had the car running in the top 10 before some car-to-car contact forced an additional pit stop. Unfortunately there just wasn’t enough time left in the race to make up for the lost time in pit lane.

“The finishing spot for the #6 car doesn’t really reflect just how well the car ran and how much effort everyone put into it. Lawrence drove great. He got up to speed during the pre-season test earlier in the month and picked up even more time in the practice session leading up to the race,” said team principal Chris Mitchum. “Qualifying was so short, Lawrence wasn’t able to get a great lap but he more than made up for it during his stint in the race. Unfortunately the contact with a BMW caused just enough damage to force a pit stop and slow the car’s pace for the rest of the race. Mike did a great job to bring the wounded car home without further incident.”

“It really was a great effort by the team, and but for one bit of contact by a competitor we would have gotten the result the team deserved at Daytona,” Mitchum added.

Mitchum’s #63 BMW was moving through the field with Joe Safina and Johnny Kanavas behind the wheel until a late race incident ruined the afternoon. With Kanavas behind the wheel, and just three laps to go, the #31 iMoto Mazda exited the track in turn one and abruptly returned to the racing line without yielding to traffic, colliding with the BMW and causing a nose-in impact with the wall. Kanavas had run in the top ten and was moving forward at the time of the accident.

“It was really disappointing to see Johnny get taken out so close to the end of the race. He was on track for a solid finish and gets knocked out through no fault of his own,” Mitchum said. “The crew and drivers put so much effort into the race weekend it is hard to swallow when it all goes wrong due to someone else’s actions.”

“Johnny will be sore for a few days after the huge impact, but he’ll be back with us in Texas. We are not sure about the car yet as it may need a complete rebuild. We won’t know for sure until we get back to the shop and can dig into it more,” added Mitchum.

The third car in the Mitchum Motorsports lineup, the #62 BMW, finished 24th in class with Christophe Conte and Izzy Sanchez behind the wheel. Both drivers put in consistent laps throughout the race and brought the car home in good condition and ready for the next round of the series.

More from
Johnny Kanavas
IMSA Others