MOMO returns to the Daytona 24H

On the eve of the 50th Anniversary Rolex 24 At Daytona - the most anticipated sports car race in the history of North American motorsports - the event lost one of its most popular stars. Gianpiero Moretti, the man who helped define the term "gentleman racer," passed away at the age of 71 in Milan, Italy.MOMO Automotive Accessories

After 14 attempts, MOMO Ferrari driver Gianpiero Moretti took the checkered flag in 1st place at the 1998 Rolex 24 At Daytona. This would remain his biggest racing achievement. He shared that special day with MOMO teammates Arie Luyendyk, Mauro Baldi and Didier Theys.

The car's colors and livery pays great tribute to the 1998 winning car of Mr. Moretti

14 years after this Daytona MOMO racing moment that will remain one of the most popular victories in the history of the Rolex 24, MOMO is pleased to announce its official return to North American racing.

MOMO recently decided to sponsor a car for the 50th anniversary of the Rolex 24 At Daytona to continue the tradition of a brand closely associated with the great history of that race.

"Momo Automotive Accessories Inc is thrilled to once again be part of this historic event," announced Marc Phaneuf, General Manager for MOMO Automotive Accessories Inc. "MOMO is synonymous with racing and the Rolex 24 is the perfect testing ground ideal for current and future development. Driver safety, and driver comfort is our first priority and our return to endurance racing will provide optimal driver feedback for current and future development. The driver feedback translates to product development and will funnel its way down to our retail customers giving them the chance to drive with the best safety products available" added Marc Phaneuf.

"MOMO was a very celebrated brand at this event in the 90s, the company founder was a highly respected and a fierce competitor, making our return for the 50th anniversary of the Rolex 24 very special. The car's colors and livery pays great tribute to the 1998 winning car of Mr. Moretti".

More than ever, MOMO will use competitive racing as the ultimate testing environment for its racing products and accessories. There is simply no better way to test your mettle!

The MOMO NGT Motorsport Porsche GT3 will be co-driven in the 2012 Rolex 24 At Daytona by Henrique Cisneros, Sean Edwards, Carlos Kauffmann and Nick Tandy.

MOMO selected one of the top North American Porsche teams, NGT Motorsport to represent the iconic brand for its return to Daytona. Founded in 2004 by Ramez Wahab, MOMO NGT Motorsport's last racing accomplishment was the IMSA GT3 team and driver Cup Challenge with Henrique Cisneros. 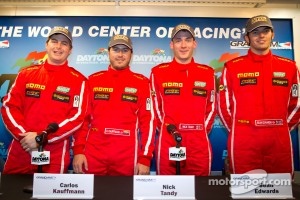 The four MOMO NGT Motorsport drivers participated successfully in the "Roar Before The Rolex 24" earlier this month to prepare for this weekend's race.

2011 Porsche Carrera Cup Champion, Nick Tandy is ready for his second Rolex 24 At Daytona. "To be racing in the legendary MOMO colors in my favorite sports car at the 50th running of the Rolex 24 At Daytona is very exciting," said Nick Tandy. "I just hope it gets even more exciting on Sunday afternoon!"

2011 Porsche Carrera Cup Vice-Champion Sean Edwards is eager to get back to the track and race on the Florida racetrack. "It's great to be racing in Daytona for the first time," said Sean Edwards. "I have done many 24 Hour races, but never this one. Obviously we go in with the aim to win, but the field is strong this year, so it will be a tough race. I am hoping that coming off the back of my win in Dubai 24 Hours two weeks ago, this will give us some luck! It's great to be involved with the iconic brand MOMO, I think it's great for them to be back for the 50th anniversary and the car looks superb."

2011 IMSA GT3 Cup Challenge Champion Henrique Cisneros is also looking for his first race at Daytona. "It will be the highlight of my racing career to represent MOMO Italy after a 14 year absence at the 50th Rolex 24 At Daytona," stated Henrique Cisneros. "We have big shoes to fill since MOMO's 1998 overall victory but I am confident NGT Motorsport has prepared a top contender for a win in the GT class."

Multiple IMSA GT3 Cup race winner and pole award winner Carlos Kauffmann was impressed by the Daytona International Speedway during the test days and is excited to race in the 50th Rolex 24 At Daytona. "I think being able to compete in this iconic race is awesome," declared Carlos Kauffmann. "Racing at Daytona with a MOMO sponsored racecar is spectacular. I really want to enjoy the ride and help my teammates take our MOMO Porsche to the highest possible finish."