After a year's break, Moses Smith returns to racing at the Rolex 24 At Daytona in the SRT Viper.

After a year's break, Driver Moses Smith is looking forward to making his return behind the steering wheel with his debut at the 24 Hours of Daytona. Moses will be racing the #87 Dodge Viper, powered by a Viper V-10 engine in the Grand Am GT Class. 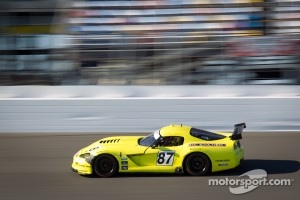 "The Viper has always been one of my dream cars. How can you not just love all that raw American torque and horsepower." Moses proclaimed.

Known as the "twice-around-the-clock-challenge," the Rolex 24 is North America's most prestigious sports car race and the kick-off event to the GRAND-AM Rolex Sports Car Series season. The race boasts of more than 70 champions from all types of racing.

GRAND-AM Road Racing has the largest sports car fan base in the United States. It showcases emerging as well as legendary drivers from around the globe. The GT category provides a stable battleground for the world's top automobile manufacturers.

The 24 hours of Daytona is going to be right up Smith's alley. Moses developed with a road racing background. However, he has spent his most recent years racing competitively in NASCAR. He was voted Most Popular Driver in the K&N Pro Series West from 2008 to 2011. He finished third in the point standings in 2011.

"I am excited to be back on a road course, and think that my experience in NASCAR will be beneficial when it comes to strategizing for the length of this race (24 Hours of Daytona)." Moses commented.

The Vehicle Technology Solutions driver line-up for the event will include Doug Peterson, Moses Smith, Tony Ave, and Jan Heylen. "I am excited about the driver line-up; these guys have a ton of experience. They are serious, yet fun to be around. I am especially excited to have Doug as a teammate again. We have had a lot of fun racing together in the past!" Moses added.

Buford blows it, then blows past them all