Pataskala, Ohio – 2012 Rolex 24 At Daytona Champion Ozz Negri got some welcome news this weekend as the Brazilian star has been cleared to drive in the 2013 Rolex 24 At Daytona. Negri suffered a lower leg injury while training on a mountain bike and was sidelined for the opening test of the 2013 GRAND-AM season. 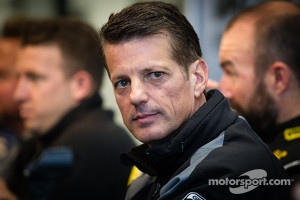 Negri was part of the driving line up that secured team owner Mike Shank his first-ever Rolex 24 victory last year. NASCAR pilot Marcos Ambrose has joined the team, along with Negri, AJ Allmendinger, John Pew, and Justin Wilson, to share the driving duties in the No. 60 Michael Shank Racing Ford-Riley as Negri is likely to run a limited schedule of stints during the 24 as his leg continues to heal.

“I’m really excited to get the news that I’ll be able to drive again in the 24-the idea of not getting to was just too much to think about!” said Negri, who is an active triathlete. “I am not sure how much time I will be driving, we will just have to see how it goes and make a decision. It’s very important to not jeopardize the team’s result. That is the main concern. A big thanks to Marcos for coming on board to help us out, we are incredibly lucky to have a guy like that join us.”