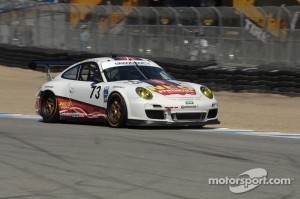 MONTEREY, Calif., September 8, 2012 – Three Porsche 911 GT3 Cup cars are entered for Sunday’s GRAND-AM Rolex Sports Car Series GT race at Mazda Raceway Laguna Seca and all three have earned top-10 qualifying positions. Horton Autosport led the way for the German marque turning the second-quickest time of the 15-minute qualifying session to set the grid for the Continental Tire Sports Car Festival Powered by Mazda at the Monterey, Calif.-facility. Narrowly behind the Horton machine in third were the internationally recognized colors of Brumos Racing. Closing-out the Porsche ranks was Magnus Racing which will start 10th in the two-hour, 45-minute sports car race.

The Continental Tire Sports Car Festival, the penultimate round of the 2012 Rolex Series GT Championship, can be seen live on SPEED tomorrow starting at 3 p.m. ET/Noon PT. Live timing and scoring of the race, as well as the 8:40 a.m. Pacific local warm-up session, can be followed at www.GRAND-AM.com.

Second starting spot, the outside of the front row of the GT class, marks the highest starting position in the Rolex Series history of Horton Autosport. Eric Foss (Dallas, Texas) got the nod to qualifying the John Horton-prepared entry lapping the No. 73 Porsche 911 GT3 Cup in one-minute, 27.857-seconds around the 2.238-mile, 11-turn racetrack nestled in the hills of the Monterey Peninsula. Foss, who shares the car with Patrick Lindsey (Santa Barbara, Calif.), narrowly missed the class pole-position by less than three-tenths of a second. The top-spot for the September 9 race went to the No. 63 Ferrari 458 Italia driven by Alessandro Balzan. Balzan qualified with a time of 1:27.594. Horton’s run betters, by one position, their previous qualifying-high of third set at Watkins Glen International in August.

“Today was obviously a great day for Horton Autosport in qualifying,” offered Foss. “We’ve been working really hard this weekend on the Porsche to get the most out of it. The track is pretty slippery so we really had to make a lot of changes but John Horton has done an amazing job engineering the car. We’re really starting to get a handle on it. We’re excited about the race tomorrow. We know it’s a long race but we really want to keep the car upfront. We want to be clean on our driver changes, our pit stops and avoid any of the issues.”

Streaking across the line behind Foss was Andrew Davis in the legendary No. 59 Brumos Racing Porsche 911 GT3 Cup entry. The Athens, Ga.-resident was timed at 1:28.240. Davis and teammate Leh Keen (Charleston, S.C.) are defending GRAND-AM Rolex GT champions as well as winners of this event in 2011.

“We didn’t come out of the box as strong as we wanted to yesterday,” said Davis about early weekend practice. “We’ve been working on the car session-to-session. Every session we improved the car. We still felt like we were missing a little time so we went for another change going into qualifying which is not always what you want to do. But it paid off and the car got even better. It’s good to have Porsches upfront, second and third, even if we missed the top spot. Brumos Racing has given us a good car. I think the race will be exciting. I don’t think we’ll drive away with it like last year but we’ll give it everything we have. It’s always nice to be out here in California where Porsche is king. We’ll try and do everyone proud tomorrow.”

Closing-out the contingent of Porsche entries, as well as the top-10, was the No. 44 Magnus Racing Porsche 911 GT3 Cup car. Salt Lake City’s John Potter turned in a best lap of 1:29.231. Potter will start the grey-and-white Porsche in tomorrow’s Noon (local) start before handing the car off to co-driver Andy Lally (Dacula, Ga.). Earlier this season, Magnus Racing was award the inaugural North American Endurance Championship (NAEC) on the back of victories in the prestigious Rolex 24 At Daytona and Brickyard Grand Prix – the first-ever sports car race at the Indianapolis Motor Speedway.

"Fifth row isn't the worst place to start, but I know we had a little more” reflected Potter on his run. “In all honesty, none of us are too worried about it. We have a great Porsche for the race tomorrow, and the Brumos and Horton guys showed the potential. Laguna Seca is notorious for long yellow flags, so I'm sure we can have a good day with fast driving and clever strategy."

“Car management and tire management is going to be really big here,” foretold Patrick Lindsey who will run the second stint of tomorrow’s race in pursuit of Horton’s first Rolex Series win. “We’ve seen a big drop off with tire wear here. I am just going to try and manage what I have that last stint and then just burn it down at the end. Starting on the front row will be a big help. We’re just hoping to close one of these out.”