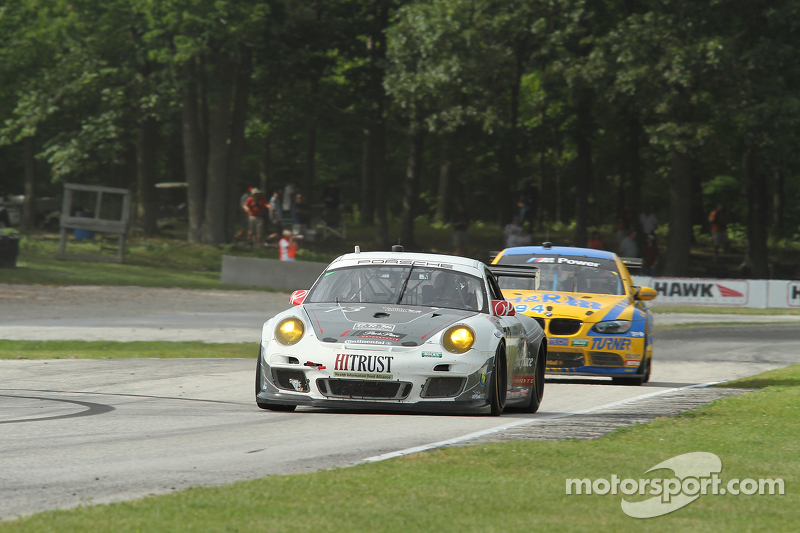 The combination of Patrick Lindsey and Patrick Long in the No. 73 Park Place Porsche 911 GT3 Cup held off a closing BMW to finish on the podium for the second time in their inaugural season.

Elkhart Lake, Wisc. Park Place Motorsports, the racing arm of one of the largest Porsche dealerships in the country, earned its second career podium finish today in the GRAND-AM Rolex Sports Car Series. Park Place led the way for the four Porsche customer cars at Road America in Elkhart Lake, Wisc. Magnus Racing finished fifth and extended their lead in the GT Driver and Team Championship while the pair of Muehlner Motorsports America entered Porsche 911 GT3 Cup cars finished ninth and tenth in the GT class. 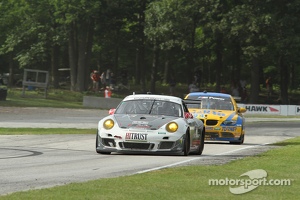 The combination of Patrick Lindsey (Santa Barbara, Calif.) and Patrick Long (Playa del Rey, Calif.) in the No. 73 Park Place Porsche 911 GT3 Cup held off a closing BMW to finish on the podium for the second time in their inaugural season while pursuing the winning BMW. Lindsey qualified third on Friday and moved up to second in the two-hour and 45-minute race’s early going.

He would hand the car over to Long, America’s only Porsche factory driver, in third place. Long would lead for much of the race before the No. 94 BMW passed for the final lead change with less than 20 minutes remaining. He would then defend to hold second until the checkered flag.

“That was a spectacular battle at the end,” offered Long after the podium celebration. “I was intent on battling the BMW, saving fuel and keeping them behind me but at the same time, I wasn’t going to compromise the podium finish for Park Place Porsche. We’re going to get that first win before the end of the year.”

Park Place driver and team principal Lindsey offered his thoughts after his second career Rolex Series podium: “It was a good day for everyone at Park Place and for our kids at Children’s Tumor Foundation. We had great strategy and the crew performed like we knew they would.

Even though our team is out of the points we are still thinking about the manufacturer battle and think we have such a strong car and team that we are trying to solidify that for Porsche. Pat Long drove his tail off towards the end of that race. It was a treat to watch him work. Today was a resumption of how we performed at Indy and we’re just going to keep doing this through the end of the year.”

The No. 44 Magnus Racing Porsche 911 GT3 Cup driven by Andy Lally (Dacula, Ga.) and John Potter (Salt Lake City, Utah) finished fifth to extend their team and driver championship point lead. The pair improved the gap to seven points over the No. 57 Stevenson Motorsports Chevrolet Camaro. Lally held the point for much of the middle portion of today’s race but relinquished it late with a stop for fuel and tires.

“The Magnus guys did a great job as always,” said Lally. “We walked away with a bigger points lead and that's always a positive. Of course, we would have liked another podium, but it's only the second time in nine races that we finished behind another Porsche. A little different luck with the yellow flags and it would have been a whole different day. Everyone did a great job.”

After running near the top five for the early going, the No. 18 entry shared by Tim Bergmeister (Germany) and Jeroen Bleekemolen (The Netherlands) suffered a left front wheel problem and fell to ninth at the checkered flag after repairs. The No. 19 of Bob Doyle (Killingworth, Conn.) and Grant Maiman (Neenah, Wisc.) had an early race misfire that was corrected by Porsche Motorsports North America. However, the repair cost the team multiple laps leaving them 10th in the final results.

The GRAND-AM Rolex Sports Car Series will race next weekend, Saturday, August 17, at Kansas Speedway. The event will be the series first visit to the track that combines the 1.5-mile oval and the facility’s new road course. FOX Sports 2 will provide live television coverage while FOX Sports 1 will re-air the race on Sunday, August 18.