LAKEVILLE, Conn., September 29, 2012 - The GRAND-AM Championship Weekend at Lime Rock Park started under a caution flag setting the tone for the entire two-hour, 45-minute event. That is until Porsche needed a yellow flag the most. At that time of need, the leading Porsche would go wanting for the fuel-saving slowdown. Despite leading 89 of the 159 GT laps run, Magnus Racing would have to settle for sixth-place after coming-up short on the fuel gamble. Instead, TRG’s Porsche 911 GT3 Cup entry would be the highest-finish Porsche in fifth at the Lakeville, Conn.-track. The Porsches of Horton Autosport and Brumos Racing retired early due to separate incidents finishing 12th and 15th respectively in Saturday’s race. 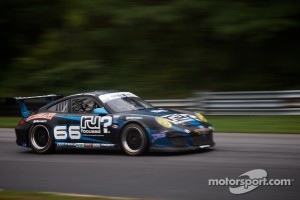 Magnus Racing made a daring pit strategy call stopping for the final time of the 2012 season one-hour and seven-minutes from the checkered flag. It would need one-hour and eight minutes of fuel to win today’s race. Andy Lally (Dacula, Ga,), who shares the Magnus car with John Potter (Salt Lake City, Utah), brought the car back to the lead after the stop and held the top-spot until the final minute of the race. It was then, with nervous eyes watching the nose-to-tail battle for any sign of fuel starvation in the No. 44, that the car first bobbled allowing a hard-charging Robin Liddell in the No. 57 Stevenson Motorsports Camaro into the lead. The Magnus car then coughed again permitting several others by. Lally would pit as the leaders took the white flag. Ultimately, the Lally/Potter-driven car would settle for sixth-place at the checkered-flag. The No. 57, which had also won the pole position and the 2011 edition of this race, went on to win.

Magnus Racing closed the year as the most successful Porsche effort in GRAND-AM. The operation was the only Porsche team to win a race taking home the Series’ two most important races: the Rolex 24 At Daytona and the Brickyard Grand Prix at Indianapolis. In the process of capturing those two endurance races they also won the inaugural GRAND-AM North American Endurance Championship (NAEC).

"This was honestly a pretty brutal way to finish the season,” offered Lally. “We had the car to beat, and coming up just a couple laps short was just gutting. Regardless, what a great season by everyone at Magnus. We won the two signature events of the season, we won the North American Endurance Championship and we were the only Porsche to see victory lane this year. I call that a success, and I couldn't be happier with the entire organization."

Continued team owner and driver John Potter: “I don't want to focus on today; it's obviously disappointing. At the end of the day, we're all extremely happy with the season. We've really enjoyed campaigning our Porsche, and to be the only Porsche team to win this year is especially gratifying. Overall, Daytona, Indy, and the inaugural NAEC are very special, so it was a great season."

The top-finishing Porsche for the day was the No. 66 TRG 911 GT3 Cup entry driven by Spencer Pumpelly (Suwanee, Ga.) and Bob Doyle (Meriden, Conn.). After an absence of several races from the Rolex Series, TRG came back in good fashion with a fifth-place result.

“It was a great team job,” said Pumpelly after the race. “Bob [Doyle] gave us a good clean first stint putting us in position to be competitive today. We stayed out of trouble and reeled in a top-five for TRG. Great work in the pits by our guys to keep us in position all day. We avoided all the attrition on the track and that allowed us to be the top-finishing Porsche.”

The remaining two 911 GT3 Cup cars had off-track excursions which ended their days early. The No. 73 Horton Autosport machine, which will make a major announcement regarding its 2013 plans on October 10, led for 10 laps before a trip off-course damaged the car too much to continue. The combination of Eric Foss (Dallas), Patrick Lindsey (Santa Barbara, Calif.) and Jason Hart (Flower Mound, Texas) finished 12th in class.

The No. 59 Brumos Racing Porsche of Andrew Davis (Athens, Ga.) and Leh Keen (Charleston, S.C.) qualified on the outside of the front-row and was looking strong in the race’s early going. As outgoing GRAND-AM champions, the internationally-renowned team was yet to win in 2012 and eager to remedy that in the season’s final race. The No. 59 was fighting at the front of the field when, going through Lime Rock's up-hill esses, the No. 51 Audi spun directly in front of Davis collecting the Brumos Porsche. Davis made heavy, head-on contact with the wall damaging the radiators and nose of the car. Despite valiant efforts by Brumos, the car could not be repaired within the time of the race. It was officially retired with approximately one-hour remaining. Brumos finished 15th out of 16 cars in the GT field. Davis was unhurt in the incident.