GT class stronger than ever, Porsche teams claim 6 of to 10 testing times.

Daytona Beach, Fla. – January 6 -- Porsches, Audis, Ferraris, BMWs, Camaros, Corvettes and Vipers; after the Rolex 24 at Daytona the end of this month, who knows who will be at the top of the podium for the 51st running of what has become a sprint race.

The stellar Rolex GT field ran seven sessions during the day and one under the lights at the combination oval and road course this weekend, and the top ten lap times were turned by six Porsche 911 GT3 Cup cars, three Audi R8 Grand-Ams, and a Ferrari 458. 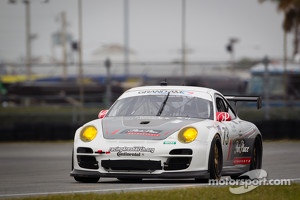 But it was Porsche factory driver Patrick Long (USA) who led the GT class in his first drive in the Park Place Motorsports Porsche 911 GT3 to be co-driven by Patrick Lindsey, Jason Hart, Spencer Pumpelly and Daniel Graeff.

“What do you get for winning practice? Some bragging rights, and some momentum for a new team in the championship. But we feel confident. People were saying, ‘What’s Park Place?’ Hopefully, this will bump them up on the Google search for sports car fans.

They caught my eye last year – that’s why I came knocking. They’re a group of young, hungry, motivated guys,” said Long of the team based at new racing division of Park Place Porsche, an authorized Porsche dealership in Dallas.

"Working with a new partnership between Park Place and Horton Autosport, it has been fun to be an integral part to get them situated for their inaugural Rolex 24.

Being at the sharp-end of the time sheet is always nice but pace is one/fifth of the battle of the Rolex 24. We're focused on hitting all our marks and working through every single part of what it takes to win one of these watches.

After you get all of that checked off you are just in the hands of the craziness of one of the biggest and coolest races in the world. We're quietly confident but realize there are a ton of variables. We're just relishing the chance and looking forward to the race itself," said Long.

Lally knows that a repeat will be a lot of work... “Last year I said the Rolex 24 had the strongest GT field in any series – ever. But this year’s field is just as strong as last year, with the addition of multiple new manufacturers that will be vying for the win.