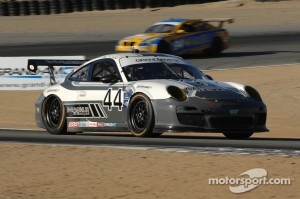 Ultimately, the penultimate race of the GT championship would yield a podium finish, third-place, for Magnus Racing while the Brumos Racing Porsche crossed the finish-line in sixth-place. The Horton Autosport entry would suffer a mechanical problem and take 16th in the final standings.

Horton Autosport was at the point for the most laps of its young Rolex Series career, leading 16 circuits of the 2.238-mile, 11-turn road course. Brumos Racing was “P1” for nine laps while Magnus Racing waited for the final 40-minutes of the race to take the lead but holding it for five laps.

The No. 44 Magnus Racing Porsche 911 GT3 Cup shared by John Potter (Salt Lake City, Utah) and Andy Lally (Dacula, Ga.) started the furthest back of all the Porsches, eighth, to start of the day. Team owner/driver Potter kept the car in the running before handing the grey and white 911 over to teammate Lally with just under two hours remaining in the race.

The 2011 NASCAR Sprint Cup Rookie of the Year would drive the car up through the field, eventually taking the GT class lead with less than an hour remaining.

Lally would hold the top-spot for five laps, relinquishing it with 34 minutes left on the clock to make the car’s final stop for fuel and tires. As pit strategies played out, Lally would climb back onto the podium on the final lap to take third, the highest finishing Porsche.

“We came so close to grabbing second that today's podium is still a little bittersweet,” said Lally after charging to third. “The guys did an awesome job on the car and playing the hand that we had. It's great to get a fourth podium." 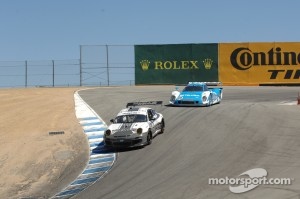 Potter continued his teammate’s thoughts: “"If you can't be first, you at least want to be first Porsche, and we did that. Another podium is great, and we knew a win would be tough, so we'll take it."

Brumos Racing ran strong throughout the middle portion of the race. Andrew Davis (Athens, Ga.) would get off to a great start from third and hold the No. 59 Porsche 911 GT3 Cup entry there until the driver change gave Leh Keen (Charleston, S.C.) the “keys” to the iconic car. Keen would race the car up to the lead until pitting with less than an hour to go.

While he would not again see the sharp-end of the field, he would return to as high as fourth when Lally passed him with 22 minutes left on the timer. He would fall one more spot to finish sixth, 25 seconds behind the winning No. 43 Mazda RX8 of Dane Cameron and Wayne Nonnamaker.

Horton Racing suffered the greatest highs and lows of all the Porsche teams on the Monterey Peninsula. The John Horton-led team let it be known they would expand to two cars in 2013 and justified that with their highest-career qualifying effort to-date starting second on the GT grid.

The red-and-white Porsche driven by Eric Foss (Dallas) and Patrick Lindsey (Santa Barbara, Calif.) went on to the lead much of the race’s early going until the team’s driver change pit stop. A left-front wheel nut issue forced an extended stop with just under two hours remaining in the event.

The delay to make the repair dropped the car from the lead to 16th in class, one lap down. Despite fighting back to as high as 13th, they eventually were forced to park the No. 73 with a mechanical issue. The California-based operation would finish sixteenth, 21 laps down.

The GRAND-AM Rolex Sports Car Series travels across the country to close the 2012 season at Lime Rock Park in Lakeville, Conn. on Sept. 29.

Spirit of Daytona and Stevenson Motorsports win at Laguna Seca

Gurney and Fogarty rebound for second-place finish at Laguna Seca