The SunTrust Racing Pontiac Riley of Max Angelelli and Wayne Taylor was the class of the 44-car Rolex Sports Car Series field this weekend at Watkins Glen International, but, in the end, it wasn't enough to beat Scott Pruett and Max Papis to the ...

The SunTrust Racing Pontiac Riley of Max Angelelli and Wayne Taylor was the class of the 44-car Rolex Sports Car Series field this weekend at Watkins Glen International, but, in the end, it wasn't enough to beat Scott Pruett and Max Papis to the checkered flag. 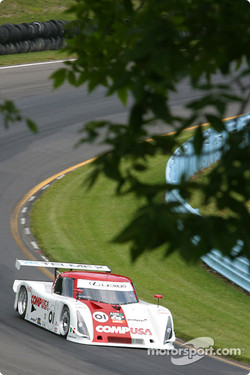 #01 CGR Grand Am Lexus Riley: Scott Pruett, Max Papis.
Photo by Eric Gilbert.
The SunTrust Riley topped the time sheets in two of the three pre-race practice sessions. It qualified on the pole, lapping the 3.4-mile, 11-turn road course more than two seconds faster than the next fastest qualifier. It led repeatedly throughout the Sahlen's Six Hours of the Glen. And it turned the race's fastest lap.

However, an endless stream of caution flags prevented Angelelli and Taylor from fully maximizing their newfound horsepower and aerodynamic gains. Instead, 10 full-course yellows and the car's thirsty Pontiac engine allowed the Chip Ganassi Racing Lexus Riley of Pruett and Papis, which had lost two laps to the leaders in the early going while the crew fixed a stuck throttle, to remain in contention long enough to win its second consecutive race.

"Our weekend was just a train wreck," explained Pruett. "I thought we had things behind us once the race started, then we had the problems with the throttle. But we just kept at it. At that point, I was just hoping to makeup a few laps and salvage something out of it. To come back and win is great."

"After the early problems, I just focused and fought harder," added Papis, who was in the car when the throttle jammed. "We proved today that we wanted it very badly."

With their win Sunday, Pruett and Papis retained their lead atop the drivers' championship.

Angelelli and Taylor hung on to finish second, 27.016 seconds behind the winners. Yet both drivers were obviously disappointed. "We had the fastest car this weekend, but weren't fast enough when it counted," admitted Taylor. "We are just so disappointed. To be quickest all weekend long and then lose it at the end is awful. But congratulations to the Ganassi guys for coming back from two laps down."

"I don't know what to say," said Angelelli, who blistered the track all weekend in just his first visit to the Glen. "To be always fastest all weekend and to finish second is terrible. What can I say? I was sure the deal was done. I'm really disappointed. We need to win the championship and this is not the way to do it." 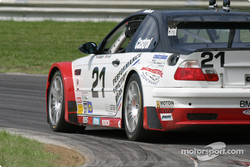 #21 Prototype Technology Group BMW M3: Bill Auberlen, Boris Said.
Photo by Eric Gilbert.
Meanwhile, in the GT class, Bill Auberlen and Boris Said drove their PTG BMW M3 to its fourth win of the season and Team PTG's first at the Glen. "Finally," exclaimed Auberlen. "We've come here so many times, led so many times, and lost so many times that it feels really good to finally win one here. Once we made it through the first turn, it was smooth sailing for the most part. The Ferrari was fast in the middle of the race, but by that time, we already had a one-lap cushion, so we just followed them for a while, and then they slowed down. Then we just maintained."

In SGS, the TPC Porsche of Andy Lally and Marc Bunting survived a close encounter with a spinning Corvette during the third caution and minor contact with the Schumacher Racing Porsche during the fourth caution to take home their first win of the year. They now have five podium finishes in five races. 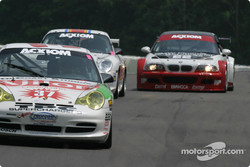 #37 TPC Racing Porsche GT3 Cup: John Littlechild, Bill Adam.
Photo by Eric Gilbert.
"We were very lucky to get through the wreck with the Corvette, and then when we got punted by the prototype, I didn't where we were and I didn't know how much damage we had," said Lally. "The exhaust was slammed shut and the left side of the motor wasn't breathing. But the guys fixed it, we got back out, and the car was 99 percent. And it just did a wicked job."

The Rolex Sports Car Series will return to the track on July 1 at Daytona International Speedway.