Starting from fourth on the GX grid, Norman Pumpelly only needed to complete his minimum drive time to claim the GX Drivers’ Championship.

LIME ROCK, Conn. - The 2013 GRAND-AM season came to a close at Lime Rock Park on Saturday with Spencer Pumpelly on a clear mission: to secure the Rolex Series GX Championship for BGB Motorsports and co-driver Dr. Jim Norman. A runner-up finish was more than enough to take home the big prize. 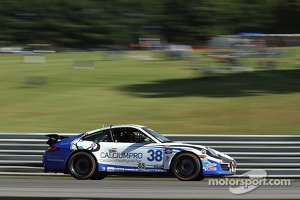 Starting from fourth on the GX grid, Norman only needed to complete his minimum drive time to claim the GX Drivers’ Championship. Having missed the Rolex 24 at Daytona with BGB Motorsports, Pumpelly was not in the hunt for a title, but was determined to score a well-deserved championship for his team and co-driver.

Norman started the car and handed it over to Pumpelly from third, 30 minutes into the two hour and 45 minute race. Pumpelly immediately gave chase to the second place No. 00 Mazda driven by Tristan Nunez and Joel Miller. Finally, after a restart with 45 minutes remaining in the race, Pumpelly saw his opportunity amongst the flood of traffic, moving past the Mazda and into second place.

Thirty minutes later, the No. 00 pulled into pit lane and retired with mechanical problems. Now lacking any pressure for a runner-up finish, the GX Team Championship was firmly in hand. Pumpelly climbed out of the car with five laps remaining, so Norman could cross the finish line himself and celebrate his drivers’ title.

“It feels great to be a part of this BGB group,” Pumpelly said. “They definitely deserved this championship. The Porsche Cayman wasn’t the easiest car to run in the GX class, but all the guys worked their butts off to give Dr. Jim and I a fast race car each weekend. Hats off to Dr. Jim for doing a great job this season. His GX Drivers’ Championship is well earned and I’m proud I could be a part of that.”

The mission accomplished in GX was just what Pumpelly and Norman needed after a bittersweet end to their Continental Tire Sports Car Challenge season. Coming off a win in the No. 38 Porsche Carrera in the most recent round at Laguna Seca, the team was looking forward to the final round at Lime Rock Park. Unfortunately, an early race incident damaged the Porsche’s radiator, forcing the team to call it a day after just 30 laps, before Pumpelly could get behind the wheel.

Though the GRAND-AM season has come to a close, the American Le Mans Series still has two more rounds to go. Next up for Pumpelly is the Oak Tree Grand Prix at VIRginia International Raceway, Oct. 3 – 5. Pumpelly will climb back into the No. 45 Flying Lizard Motorsports Porsche 911 GT3 Cup, chasing a GTC Championship. Pumpelly and co-driver Nelson Canache Jr. are second in the point standings, four points out of first.