After starting from the back of the GS grid, Spencer Pumpelly worked a clever strategy to advance through the field.

MONTEREY, Calif. – Spencer Pumpelly took his first Continental Tire Sports Car Challenge victory of the season last weekend at Mazda Raceway Laguna Seca. After starting from the back of the GS grid, BGB Motorsports worked a clever strategy to advance through the field and relied on Pumpelly to hold off a hard charging BMW for the win. Pumpelly followed the GS win with a runner-up finish in the Rolex Series GX class the same day. 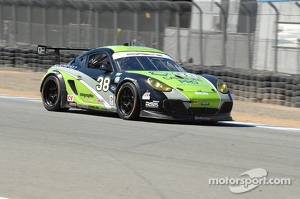 On Saturday, it appeared as though a GS win for Pumpelly and team was unlikely. Co-driver Dr. Jim Norman had made only one lap in qualifying before an ABS failure ended in a flat-spotted tire. So severe was the vibration, the team opted to abort qualifying to avoid damaging the car. In the ultra competitive GS field, starting from the back of the grid is more than an uphill battle: it’s a mountain.

At the start of the two hour and 30-minute race, Norman successfully advanced the No. 38 Porsche Carrera six positions before handing the car over to Pumpelly. Though the Porsche was quick on its own, Pumpelly encountered some difficulty when attempting to claw his way through the field.

“The car felt great, but I was having trouble passing cars,” Pumpelly said. “Several of the corners at Laguna Seca aren’t very compatible with our gear ratios, which made me a sitting duck in some parts. After about 15 minutes, I’d only passed one car. The team came on the radio and said we were in our fuel window to pit and go the distance, so that’s what we did.”

BGB was the only team to gamble on this strategy, pitting on lap 36 with one hour and 15 minutes remaining in the race. To ensure a speedy pit stop and keep Pumpelly on the lead lap, the team opted to change right side tires only.

For the team’s plan to work and Pumpelly to make it the distance, there would need to be another full-course caution before the race finished. The team got just what they needed a mere five laps after their pit stop.

As the rest of the GS field took to pit lane, Pumpelly inherited the race lead. A flawless restart enabled him to pull away from the field and put a considerable distance between himself and second-place. This gap was erased when another full-course caution was issued with only 20 minutes remaining in the race.

Pumpelly had been nosed out of the way in the closing laps of last year’s race at Laguna Seca, but was determined not to let history repeat itself. He got away from the final restart clean, but couldn’t shake the No. 96 BMW driven by Bill Auberlen.

“With four laps to go Auberlen got a run on me coming out of Turn Six, but that put him on the outside of the Corkscrew,” Pumpelly said. “I left him room and raced him clean so we went through the corkscrew side-by-side. I had a bigger radius on the outside of Turn Nine and got my nose ahead of him.

I had about a two- or three-car gap by the time we got to the front straightaway. As I’m on the front straight away, I see he’s pulling off to the side. That stacked everyone else up and when I got to Turn One I couldn’t see anyone in my mirror.”

After the BMW pulled off with mechanical problems, Pumpelly cruised to the race win, crossing the line with a 4.466-second margin of victory.

Starting from third on the GX grid in the No. 38 Porsche Cayman, co-driver Dr. Jim Norman picked up a spot and handed the car over to Pumpelly in second with just under two hours remaining in the race. Pumpelly was able to get around the leading No. 70 Mazda6 shortly after joining the race, but fell back to second during the next round of pit stops.

“The Mazdas are very efficient and have small gas tanks,” Pumpelly explained. “Even though the BGB team was flawless on pit stops, the Mazdas simply take less time to fuel in the pits and beat us out.”

Back on track, Pumpelly was unable to make up the ground lost to the No. 70 and finished the two hour and 45 minute race in second.

“The Mazdas were the faster car today, but the second-place finish puts Dr. Jim and BGB in a good spot for the GX Championship,” Pumpelly said. “It takes off some of the pressure for the finale at Lime Rock. I’m confident we can get the job done there and take home the big prize.”

Before wrapping up the GRAND-AM season at Lime Rock Park, Pumpelly travels to Austin, Texas, and Circuit of the Americas for Round Eight of the American Le Mans Series.

Pumpelly scored a double podium racing at COTA with GRAND-AM in March and is hoping his luck in the Lone Star State will continue with Flying Lizard Motorsports and the No. 45 Porsche 911 GT3 Cup.

The ALMS race at COTA is set for 4:45 pm ET on Saturday, Sept. 21. The race will air Sunday, Sept. 22, on ESPN2 at 1 pm ET. Live timing and streaming for viewers outside the U.S. is available at ALMS.com.

BMW drivers podium in every class at Laguna Seca