T-Minus 6 Months: The Role Of The Grand Marshal

Eagerly anticipated by drivers, auto manufacturers and race fans everywhere, the Rolex 24 At Daytona is the first major race of the international motor sport season. Every January, the Daytona International Speedway (Daytona Beach, Florida, USA) comes to life in celebration of this incredible endurance race, recognized by leading drivers as one of the most difficult in the world to win. 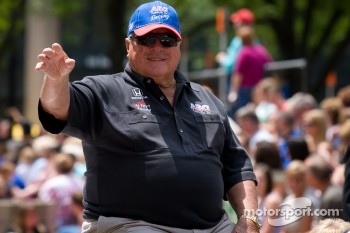 Building anticipation for the 50th Anniversary 2012

2012 will mark the 50th Anniversary of the Rolex 24 At Daytona. Leading up to this unique anniversary, we present a once-a-month look back through the history, people and events that have made this famous race what it is today. This month, we take a look at the Grand Marshal and spotlight some of the greats who have fulfilled this role for the Rolex 24 At Daytona over the years.

The Role of the Grand Marshal

The Grand Marshal has always played an important role in the world of racing. As drivers line up on the start grid, hearts pounding and adrenaline racing, it is the Grand Marshal who gives them their cue to start their engines. This command has taken a variety of forms over the years, though usually some variation of “Drivers, start your engines,” as the protocol is unofficial and at the discretion of the Grand Marshal. As partial host for racing festivities, the Grand Marshal is usually someone who has shown exceptional leadership in their field and who is often regarded as a cultural hero.

The list of “who’s who” for Grand Marshals at Daytona only reaffirms this privileged role. For the 50th Anniversary of the Rolex 24 At Daytona, A.J. Foyt (USA) will be stepping in as the signal giver for the 2012 start. “We’re honoured to have one of the greatest drivers in the history of auto racing – A.J. Foyt – serve as Grand Marshal as we commemorate 50 years of endurance racing at the ‘World Center of Racing,’ ” said Daytona International Speedway President Joie Chitwood III. Foyt is a two-time overall champion of the Rolex 24 At Daytona, having won this twice-around-the-clock challenge in both 1983 and 1985. He holds the distinction of having led the first lap of the inaugural race in 1962 – then known as the Daytona Continental – in a Nichels-prepared Pontiac Tempest. 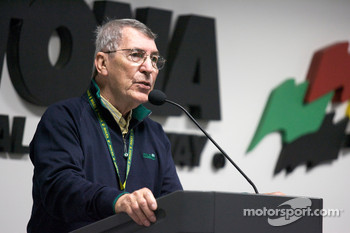 2010 saw Vic Elford (GBR), one of the most versatile drivers in racing history and winner of the 1968 Rolex 24 At Daytona, serving as Grand Marshal. The 2009 edition of the race had Brian Redman (GBR), three-time winner of the Rolex 24, carrying out the duties of signalling the start and presenting the winners with Rolex Oyster Perpetual Cosmograph Daytona timepieces in Gatorade Victory Lane. Redman famously announced the start with a slight twist: “Ladies and gentlemen, start your engines!”.

American Richard Petty is another cultural icon to have served as Grand Marshal for the Rolex 24 At Daytona. Petty, who holds the greatest number of NASCAR victories at 200, is known as "The King" in the stock-car racing world, and filled the role of Grand Marshal in 2007. "It's an honour to be the Grand Marshal for this event," Petty said. "Any event at Daytona is a special event and the Rolex 24 is one of them. It was always a great track for us and this is a chance to give back to a place that has given us so much.” Petty is known in Grand Marshal lore for having started his final Daytona 500 with the command, “OK guys, crank ‘em up.”

In 2006, Daytona International Speedway honoured American driver Benny Parsons in celebration of the 30th anniversary of BMW's win in the 1976 Rolex 24 At Daytona. Parsons finished 10th in that 1976 race, co-driving a BMW with David Hobbs (GBR) making him the highest finisher among the eight NASCAR drivers that competed in the Rolex 24 that year. The team's lead car, driven by Brian Redman, Peter Gregg (USA) and John Fitzpatrick (GBR), captured BMW's only Rolex 24 triumph - by a 14-lap margin - over the Al Holbert (USA) and Claude Ballot (FRA) Lena Porsche. Parsons, champion of the 1975 Daytona 500 and the 1973 NASCAR Cup Series, gave his “Gentleman, start your engines” command to a then-record 30 Daytona Prototypes and 36 GT cars on the 2006 start grid. 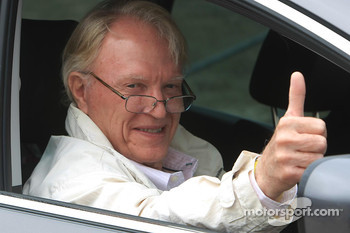 Derek Bell (GBR), a three-time Rolex 24 At Daytona champion and one of the most popular drivers in international sports car racing history, served as the Grand Marshal in 2005, following Sir Stirling Moss (GBR), who held the honour for the 2004 edition of the race. Preceding Moss as the Grand Marshal in 2003 was Bobby Rahal, one of the few Americans to compete in Formula 1, a driver who also captured the overall title in the 1981 Rolex 24 piloting a Porsche Turbo with Brian Redman and Bob Garretson (USA).

The choice of Grand Marshal sets the tone of the race, and having such legends return to action – albeit not in the driver’s seat – keeps these key figures of motorsports history in the public eye. These are the men who changed motorsports history forever, the ones who won big, lost big and still came out on top once they left their cars for the last time. The Grand Marshal tradition is one of the cornerstones of motor racing, perpetuating the life cycles of the sport’s heroes in sharing their spirit across new generations of team, fans, and drivers.

Rolex Cosmograph Daytona: Tribute to the birthplace of speed

The Rolex 24 Hours of Daytona is a world-class race, rewarding all its deserving winners with a place in motor sports history and a steel Rolex Cosmograph Daytona, named “the world’s rarest watch” by WatchTime magazine.

It was in 1959 that Rolex first began its long association with the Daytona International Speedway. In 1963, Rolex launched their new “Cosmograph” line, but it was not until 1965 that the name “Daytona” would be added to the dial as a tribute to the great Florida race. Designed for lovers of speed, the Rolex Cosmograph Daytona allows its wearer to clock elapsed times and calculate average speeds.

In 1992 Rolex became the Title Sponsor of the 24-hour race at Daytona, which had since become one of the world’s most prestigious endurance competitions along with the 24 Hours of Le Mans.