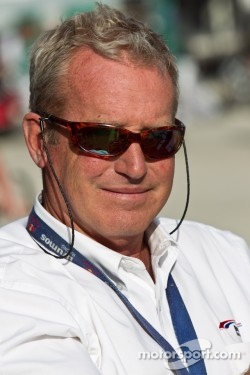 While much-needed rain showered Daytona International Speedway this morning, it in no way dampened the excitement of spectators and competitors who have assembled for this weekend’s golden anniversary of the Rolex 24 At Daytona. With 2012 marking the 50th running of the twice-around-the-clock challenge, fans are not the only ones to have turned out in force to be part of this historic event.

Over the last several months GRAND-AM had undertaken the herculean challenge of locating all the championship winning cars, resulting in close to 30 cars returning to be a part of the Rolex 50 Years of Champions display. Having participated in a charity gala last evening to benefit the Halifax Health Foundation, this morning the cars processed from Daytona Beach to the Speedway, thrilling hundreds of spectators who had gathered at strategic spots to see the vintage cars and recent winners as they passed. The cars will be on exhibit, free of charge, for the remainder of the weekend in a tent outside the track near the Sprint Tower.

Also returning to the place where they entered the history books are 47 overall champion drivers, half of whom will drive in the anniversary race, including the man who currently holds a record five wins of the Rolex 24 At Daytona: Hurley Haywood.

“The only Rolex I have won for the Rolex 24 At Daytona was for my win in 1991 and I’ve been trying to win another one ever since,” said Haywood of the six Rolex timepieces in his collection. “Winning that watch in 1991 was very special. Back then, as it is now, the big lure to racing here at Daytona is the chance to win a Rolex. Every single driver, no matter where they race, it is the Rolex that they want to win.”

“Everyone wants to be here, it’s remarkable,” said actor Patrick Dempsey, whose Dempsey Racing Team finished on the podium at the 2011 Rolex 24 At Daytona. “As far as the iconic drivers who are here this weekend…it is Dan Gurney who I would most like to meet and talk to. He is such a gentleman and has contributed so much to the sport… it’s nice to see his generation being represented here.”

The historic 50th Anniversary of the Rolex 24 At Daytona gets underway on Saturday, January 28 at 3:30 p.m. with 14 DP and 45 GT entries taking to the Speedway's 3.56-mile 12-turn road course. At 40-feet wide, the tri-oval has east and west turns that are banked at 31 degrees, with banking of 18 degrees at the start/finish line. During this grueling endurance race, the 1600-foot long Pit Road is a beehive of activity where crews can refuel and change all four tires in less than 25 seconds.