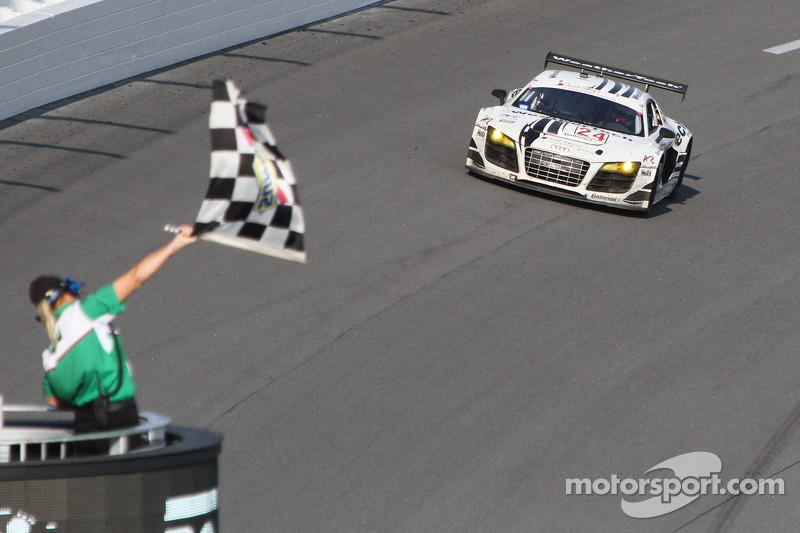 The Audi brand had a very mixed season in the demanding Rolex Series GT class this year. The American "R16" won the prestigious Rolex 24 at Daytona with a terrific 1-2 result.

Five teams represented the Four Rings in the 2013 Grand-Am season, but none of them competed at all of the rounds as full season entrants. Alex Job Racing and Rum Bum Racing only took part in the Rolex 24 at Daytona. APR Motorsport had two cars at Daytona and then a single car at Austin, before they withdrew from the series.

Fall-Line Motorsports debuted their Audi at Watkins Glen and they entered all of the remaining races and performed very well. Audi also entered two rounds with a factory effort from quattro GmbH/Audi Sport customer racing, competing in the two endurance events at Watkins Glen and Indianapolis.

Round 1: Rolex 24 at Daytona The 2013 Grand-Am season got under way this weekend with the Daytona 24 Hours. Four Audi R8 GRAND-AM cars were entered by three teams, APR Motorsport, Alex Job Racing and Rum Bum Racing. The teams showed good pace at the Daytona tests days and continued that form during the practice and qualifying sessions. The top Audi qualifier was the #24 AJR entry which originally qualified in sixth and was then upped to fifth place after another competitor was disqualified.

The teams were ready for the race which started at 15:30 local time. The race got under way with the Audi teams maintaining their front running pace. All three teams ran at the front end during the afternoon and during the night. Audi held a 1-2-3 during the early evening until various problems, including penalties, dropped them back slightly, but all three remained in the top ten. As the race pasted half way the AJR Audi remained the highest placed Audi followed by the Rum Bum entry.

The #52 APR suffered a crippling time penalty during the night. As the sun rose over Daytona both the AJR and Rum Bum cars were penalized and they dropped back. The #52 completed a tremendous comeback and was running in the leading group as the race headed into the afternoon followed by both the AJR and Rum Bum cars who were also completing great recovery drives. The race developed into a huge fight in the last thirty minutes as multiple cars stood a chance of winning.

AJR managed to hold the lead after a splash and dash and lead a Audi 1-2-3 on the final lap. Tragedy struck as the Rum Bum car ran out of fuel on the last lap leaving the other two Audis to complete an Audi 1-2 with the #24 AJR winning ahead of the #52 APR. More details regarding the race can be read HERE.

Round 2: Circuit of the Americas

Following the Daytona 24 Hours the second Grand Am round was held at the new Circuit of the Americas in Austin. Four Audis took part at Daytona, however only one Audi was entered for round two. APR entered the black #52 Audi R8 GRAND-AM which was driven by Ian Baas and Matt Bell. They qualified seventh. During the race the team ran very well. Within the last half an hour they were battling in the top five until an incident with a Ferrari put the APR Audi out of the race.

APR Motorsport withdrew their Audi R8 GRAND-AM entry after round two at COTA. There were no Audi entries at Barber Motorsports Park, Road Atlanta, Belle Isle Park and Mid-Ohio, rounds 3-6 of the series. However, this was not the end of the Audi R8 GRAND-AM in the 2013 Rolex Series, as Audi R8 GRAND-AM cars returned to the grid for the Six Hours of Watkins Glen, round seven of the season.

Round 7: Six Hours of the Glen

The Six Hours of the Glen was held this weekend. This event was round seven of the Rolex Grand-Am Series, but it was also round two of the North American Endurance Championship. The latter series consists of the endurance Grand-Am events, namely: the Daytona 24 Hours, the Six Hours of the Glen and the three hour race at Indianapolis. For the first time since round two of the Grand-Am series Audi cars again took part. Two cars were entered this weekend. Fall-Line Motorsports debuted their R8 GRAND-AM in the series for the first time, whilst the second car was entered by Audi Sport customer racing. The #24 Audi Sport entry will be entered for the remaining two endurance events. Their drivers: Felipe Albuquerque, Eduardo Mortara and Dion von Moltke, are leading the standings following their victory at the Daytona 24 Hours. The two Audis showed well during the weekend with the #24 car qualifying in fourth and the Fall-Line entry in twelfth.

It was an up and down race for the two Audis. The Fall-Line Motorsports Audi R8 GRAND-AM lead the race for five laps during the pit stop sequences, but they eventually dropped back and finished fourteenth. The #24 Audi Sport customer racing entry also fell back during the event and ultimately finished within the top ten, placing in ninth.

The Grand-Am Rolex Series headed to the Indianapolis Motor Speedway this weekend, for the Brickyard Grand Prix. This event was the eighth round of the Rolex Series, and more importantly, it was the third and final round of the North American Endurance Championship. Two Audi R8 GRAND-AM cars were entered, the factory #24 Audi and the Fall-Line Motorsports car. The factory Audi squad showed excellent pace all weekend, and qualified in third for the three hour event, followed by the Fall-Line Motorsports entry in ninth. Filipe Albuquerque took the green flag in the #24 Audi R8 GRAND-AM and remained within the front battle for the first hour. He was running as high as second for the majority of his stint and things were looking good.

Unfortunately tragedy struck within the second hour. The #94 BMW M3 lost control in the in-field section and collected Albuquerque from behind. The resulting damage ended the #24 Audi’s race and their bid for the NAEC title. Further back the Fall-Line Motorsports Audi R8 GRAND-AM soldiered on well and came home for a top ten result, finishing ninth within the GT class.

Road America hosted round nine of the Grand-Am Rolex Series this weekend. Fall-Line Motorsports was the only Audi entry at the event, with their #46 Audi R8 GRAND-Am driven by Charles Espenlaub and Charles Putman. The team took part in the opening three practice sessions, but ultimately they made the decision to withdraw the Audi from the Road America weekend. The reason behind the decision was that the team has not had sufficient time to test and develop their new Audi R8 GRAND-AM.

They have completed two races with the Audi, but hardly any testing. They will now focus on testing with the Audi and getting up to speed to challenge effectively in the Grand-Am Rolex Series. The team’s official press release regarding the withdrawal can be seen HERE.

Fall-Line Motorsports was back in the Grand-Am this weekend, taking part in round ten at Kansas Speedway. A week ago they withdrew their Audi entry at Road America due to lack of testing time since acquiring the car, but they were back this week, and with two new drivers in the Audi: Mark Boden and Bryan Sellers. They qualified tenth for the two hour forty-five minute race and finished fifth within the GT class.

The eleventh and penultimate Grand-Am race weekend headed to Laguna Seca. The Fall-Line Motorsports Audi R8 GRAND-AM was entered, driven by Al Carter and Bryan Sellers. The team was also allowed to use the original 2013 specification Audi R8 LMS ultra rear diffuser, after it was cleared by the series organisers, but the car had to be fitted with penalty weight due to the change. They qualified sixth and finished the race in ninth place within the GT class.

Lime Rock Park played host to the twelfth and final round of the Rolex Grand-Am Series. Fall-Line Motorsports was again the lone Audi entrant with their #46 Audi R8 GRAND-AM, driven by Al Carter and Eric Lux this weekend. They qualified in twelfth and finished the 2 hour forty-five minute race in twelfth place as well.

Special thanks to our friend Dion von Moltke. The South African rising sportscar star raced twice with Audi in the Rolex Series this year. The Daytona 24 Hours GT victory was certainly a tremendous highlight. You can read our interview with Dion von Moltke right HERE. More about Dion von Moltke at his official website www.dionvm.com, his Facebook page www.facebook.com/Dionvm and Twitter www.twitter.com/Dionvmracing.