DAYTONA BEACH, Fla. (Sept., 25, 2013) – Carrying tremendous momentum toward the future, the GRAND-AM Rolex Sports Car Series will celebrate its past and present on Monday night in the 2013 Rolex Champions Awards at Manhattan’s Gotham Hall. 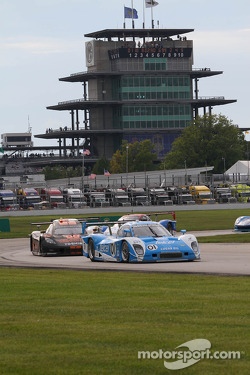 Cassadee Pope, who last year won the third season of NBC’s hit show, The Voice, will perform. The petite powerhouse ascended to the No. 1 spot on the iTunes All-Genre chart multiple times throughout the competition and topped the iTunes Country Singles Chart with her debut single, "Wasting All These Tears."

Her Republic Nashville album FRAME BY FRAME is slated for release on October 8, and fans can also catch her brand new docu-series, which premieres on October 4 on CMT. No stranger to NASCAR, Pope performed the National Anthem before the Brickyard 400 at Indianapolis Motor Speedway earlier this year.

A retrospective on 14 seasons of incredible Rolex Series competition is also planned, as well as a look ahead to the 2014 launch of the TUDOR United SportsCar Championship – which will combine the Rolex Series and the American Le Mans Series presented by Tequila Patrón.

Of course, the undisputed stars of the show will be the newly crowned champions of the Rolex Series’ Daytona Prototype (DP), GT and GX classes. Champion drivers, teams and manufacturers will be honored in a fast-paced ceremony hosted by FOX Sports commentators Bob Varsha and Justin Bell.

Additional highlights will be the popular Rolex Series Moment of the Year nomination and presentation, the Monticello Motor Club Rookie of The Year and the highly coveted Jim Trueman and Bob Akin Awards for sportsman drivers in the DP and GT divisions.

Winners of the 2013 North American Endurance Championship presented by VISITFLORIDA.com also will be recognized, along with season-long winners of the TOTAL Performance Specialties Pole Award for each class and the Sunoco Diamond Performance Award.

A reception honoring the champions will begin at 6 p.m. ET, with the program slated to start at 7 p.m.

The Rolex Series celebration will be preceded by the Continental Tire Sports Car Challenge Awards, which will be held at Lime Rock Park on Saturday evening. The celebration will honor the champions from both the Grand Sport and Street Tuner classes beginning at 7:15 p.m., and will include a live performance by Davy Knowles.