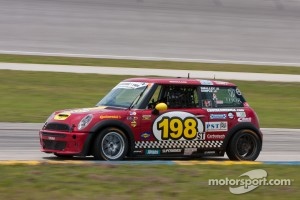 The MINI is not eligible for competition next year per GRAND-AM rules, and RSR Motorsports hopes to end the MINI’s five-year run with a great result at Lime Rock Park on Friday.

“I started with the team back in ’07 and we were a backmarker then,” says driver and team manager Owen Trinkler. “To see how far the car has come, and to be a front-runner now with the other manufacturers, feels good. We developed it into a competitive race car.”

That competitiveness adds up to three wins, five podiums and seven poles in the MINI Cooper S. Last year, Dicky Riegel and Matt Plumb finished second at Lime Rock in the No. 195 MINI.

“We are the only pro team in the U.S. to have that kind of success in a MINI,” Trinkler adds. “I remember the days when we were just trying to break into the top 25, but then we started getting on the podium and winning. The series has gotten more competitive, but we’ve shown that we can still be up front with the brand.”

Sarah Cattaneo, who got her first professional win at New Jersey Motorsports Park in an RSR MINI, returns to the team this weekend. She and 2011 British MINI Challenge Champion Chris Knox will co-drive the No. 198 MINI.

“I’m so excited that I get to do this race,” says Cattaneo. “I‘ve have so much success in the MINI and with RSR that it’s bittersweet to be able to drive it in this last race. We’re really excited about going to a track where we are so competitive, and I hope we can get a good finish for the car’s last race.”

“It’s the end of an era for us. It’s the last race of a car at a track where it’s done well over the years,” says RSR Motorsports team owner Randall Smalley. “My first race with GRAND-AM was at Lime Rock in ’06 before we did our own team, so it has special meaning for me. It’s a great track for the MINI, and I think Sarah and Chris will make a good driving team.”

Puskar and Riegel will co-drive the other RSR Motorsports MINI Cooper S. Riegel is hoping that the No. 195 MINI will be a Lime Rock podium contender yet again.