First driver championship for both Matt Plumb and Nick Longhi. 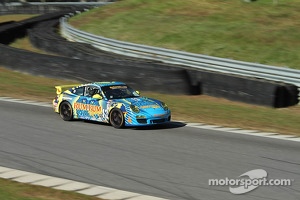 The 2013 season saw Rum Bum Racing utilize both teamwork and speed in equal measure to score three wins and seven podiums, including the incredible debut for the team’s in-house built Porsche 911 that saw Rum Bum win at Mid-Ohio. After track debris went into the engine area at the penultimate round of racing at Mazda Raceway Laguna Seca, Rum Bum Racing fans had to wait until Lime Rock Park for the team to confirm the championship goal.

"Winning one of these championships is like getting struck by lightning; it rarely ever happens twice,” said Plumb. “And the fact that we have won it twice like this is really a testament to the team, from the top-down. From Mr. Bacardi to Joe Varde to all the guys going over the wall, everyone knows what their job is, they know how to do it.

"In 2009 when Joe Varde and I sat down and tried to map out what this was all going to look like, winning the 2012 and 2013 championship was not necessarily 'hanging off the tree',” said Plumb, who also works outside the cockpit as the general manager for the team. “But we knew we wanted to win races and we knew we had to please our owner whose goal was to win races and so we are just thrilled to have had the luck and the good fortune to get here."

Longhi, who qualified sixth, then took a heads-up and conservative approach in the early stages of the race before turning the car over to Plumb to take to the finish. On the final pit stop during the all-green-flag race, Varde eschewed new Continental Tires to score track position.

The race, like much of what Rum Bum Racing has set out to achieve, went largely according to plan as Plumb was able to move up to fight for a third place finish as the team capped off an incredible year with yet more champagne.

"It was obviously a culmination of a lot of effort,” said Longhi. “It all started with Luis Bacardi and Matt Plumb who were the originators of the entire concept and approach, and then Joe Varde bringing that team together that Matt has run. Not only does he drive the car but he also runs the team, and over the last few years it has been a fantastically successful arrangement.”

Claiming his first-ever driver championship was something that Longhi was happy to do, but the New York resident has been focused on what the team could accomplish from day one.

“It's an incredibly privileged position to be in, to be involved with this group of people because they are fantastic,” said Longhi. “It's a fantastic group of people. I don't know if 'chemistry' is the right word, but we are all friends and I think that is extremely important.”

Rum Bum Racing will look forward to continuing its legacy of success, and will announce plans for 2014 in the coming weeks.

The Lime Rock Park Champions Weekend race will be broadcast on Fox Sports 1 on October 6 at 5:00 PM ET.