The Automatic Racing team took 3 BMW's to Austin, Texas for anyone to test. Ozz Negri and John Pew, 2012 Rolex 24 at Daytona winners, took them up on the offer.

ORLANDO, Fla.—Automatic Racing completed a two-day test at the Circuit of the Americas in Austin, Texas, on Monday and Tuesday. The team had three BMW M3s there, allowing a number of drivers to get valuable track time at the new venue. 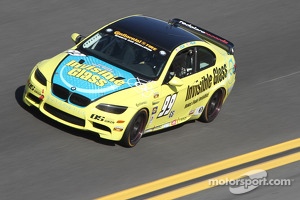 Over the past decade, Automatic Racing has established a testing and development platform, providing opportunities for establishing baseline setups, getting quality seat time and developing driver skills. The GRAND-AM Continental Tire Sports Car Challenge team conducts testing throughout the United States on a year-round basis.

It was the first visit to the new circuit for 2012 Rolex 24 at Daytona winners Oswaldo Negri, Jr. and John Pew. They were both impressed with the track as well as with Automatic Racing’s testing program. “It went awesome; it was the best thing we could do,” Negri notes. “The car never missed a beat; it was a joy to drive. The baseline setup that Automatic Racing had was perfect and the car was fast and extremely reliable.”

Over the course of the two-day test, Pew completed almost 600 miles around the 3.4-mile track. Pew says, “We had a very successful two days. The team is fantastic, a really good bunch of guys. The track is an awesome place and absolutely the number one track in the U.S. right now. There’s nothing like being there in a real car for a test. The car and the team were flawless, and everything worked perfectly.”

Automatic Racing alumni and 2010 Grand Sport Champion Charlie Putman was among the drivers who took advantage of the Automatic Racing test. “This was my second trip to the Circuit of the Americas and it’s a beautiful facility and a great track. The car was good and we were able to pick up a couple of seconds over the course of the day.”

Up-and-coming talent DJ Randall also drove one of the Automatic Racing M3s at the test. He is no stranger to the team, and made his GRAND-AM Continental Tire Sports Car Challenge debut with Automatic in 2011, driving at Mid-Ohio. The 23-year-old says, “I felt like the track itself was really one of the highest quality tracks I’ve been to yet. The M3 was suited to helping me learn the track and the car was setup perfectly.”

Automatic Racing will return to the Circuit of the Americas for the second GRAND-AM Continental Tire Sports Car Challenge race of the season on March 2. They will field their two Grand Sport class entries: the No. 99 BMW M3 driven by Rob Ecklin and Steve Phillips, and the No. 140 Aston Martin Vantage with co-drivers Tim Fox and Kris Wilson.