Johannes Van Overbeek will join Jeff Westphal behind the wheel of the team’s second car, the #64 Ferrari 458 Italia.

This will be Van Overbeek’s second turn behind the wheel with Scuderia Corsa as he and Alessandro Balzan helped Ferrari capture the manufacturers title exactly one year ago at Lime Rock with a podium finish in the #63. The #64 will be competing in its fourth race of the season, having participated at the 24 Hrs. At Daytona, Indy and Road America.

“I would like to thank our sponsor Ultratech. We are very lucky to have such an important supporter that is also a big player in the Silicon Valley community. 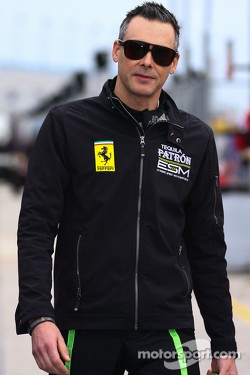 We are very proud of the close ties that Ferrari Silicon Valley has developed over the last 8 years with the high tech community. Johannes and Jeff, both being locals, are the perfect duo to complete a true Silicon Valley car!” said team owner Giacomo Mattioli.

Jeff Westphal, who along with Van Overbeek lives in the San Francisco area, added "I am excited for the finale at Lime Rock. It’s an honor to be racing the #64 and representing two important Northern California companies such as Ultratech and Ferrari Silicon Valley in the Rolex series for Scuderia Corsa. The Ferrari should be good package around the small bullring that is Lime Rock Park." Westphal, a team driver, drove five races this season with Alessandro Balzan in the #63, earning three podium finishes.

Johannes Van Overbeek, who has spent the 2013 racing season in Grand-AM’s future partner ALMS said, "I've had a long and happy relationship with Giacomo and Art. Seeing Scuderia Corsa grow and mature into a championship caliber team brings lots of satisfaction. Last year at Lime Rock Alessandro and I had a good race that contributed to Ferrari winning the constructors championship. This year I'm pleased to be driving with Jeff in the #64 sponsored by Ultratech. I can't wait for Lime Rock!"

The #63 car, piloted by two-time Rolex GT champion Leh Keen and Grand-AM’s breakout star of the season Alessandro Balzan will be looking to take the 2013 championship. Balzan, who has led the driver championship points through much of this season is currently in 2nd place and looking to take the championship for both the team and driver titles. Scuderia Corsa, which is currently 2nd in the team points, has earned eight top-five finishes in 11 races which has helped Ferrari maintain a season long lead in the manufacturer title.