June 17, 2013 – Los Angeles, CA – The famed Mid-Ohio Sports Car Course lived up to its reputation as America’s most challenging racetrack this past weekend, with numerous yellow flags and several key penalties throughout the race.

The No.63 Scuderia Corsa Ferrari 458 fought hard to regain lost ground after a 60 second stop and go penalty was assessed for contact in the 45th minute. Jeff Westphal, who qualified the No.63 in 5th position fought hard to rejoin the leaders and handed the car to Alessandro Balzan for the second half of the 2 hour 45 minute race.

Team principal Giacomo Mattioli, looking back on a wild day of racing said, “This was a tough one. The competition was fierce and it was not easy to overtake. We also had to serve a 60 second penalty. In the end, it turns out we actually gained points against our direct competitor for the championship, so now we’re looking forward to the 6 Hours of the Glen.” 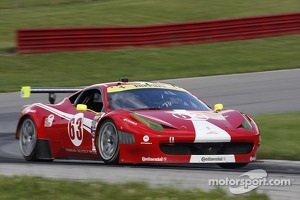 Driver Alessandro Balzan, reflecting on his first Mid-Ohio experience said, “It’s been a rough weekend, but I am satisfied with the overall result considering the #63’s position after the first 30 minutes of the race. Low temperatures didn’t help us but the No.63 Ferrari was still competitive. Our team is looking ahead to the Glen and taking home a significant learning experience from Mid-Ohio.”

Co-driver Jeff Westphal added, “It was a very challenging race for the No. 63 with many ups and downs; a penalty put us a lap down, yet I didn't stop pushing to earn our lap back and make up as much ground as possible before handing the car to Alessandro. I am very proud of the team for not giving up and figuring out the best strategy to mount a comeback through the field."

Driving under light rain towards the end of the race, Balzan keeps the No.63 near the top for the overall championship with a 7th place finish. Both Balzan and Scuderia Corsa are in second place in the driver and team Grand-AM Rolex GT championship and North American Endurance championship point standings, thereby enabling Ferrari to maintain the manufacturers lead.

The team will continue its quest for the Endurance championship at Sahlen’s Six Hours of the Glen in Watkins Glen, NY on June 30, 2013.