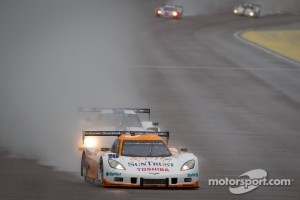 HOMESTEAD, Fla. (April 28, 2012) – Daytona Prototype co-drivers Ricky Taylor and Max Angelelli returned to victory lane in the Grand Prix of Miami, as did Ferrari in the GT class with co-drivers Jeff Segal and Emil Assentato on Sunday at Homestead-Miami Speedway in a race dominated by rain.

Rolex Series race cars and their Continental rain tires are designed to race in wet conditions, but a number of torrential downpours and standing water in various locations around the 2.3- mile circuit made conditions treacherous. With no relief in sight, GRAND-AM officials ended the race at 3 p.m. ET, 52 minutes shy of its scheduled finish.

Angelelli started the No. 10 SunTrust Corvette DP from the rear of a DP grid set on points following Saturday’s qualifying rainout, but moved all the way to third before turning the car over to Taylor on Lap 21. Seven laps later, Taylor took advantage of contact between leader Richard Westbrook and second-place Enzo Potolicchio on a restart to take the lead.

Potolicchio, who led 15 laps after starting from the pole position, passed Taylor for the lead on the following lap. However, he served a drive-through penalty plus five seconds on the following lap for what GRAND-AM officials determined to be avoidable contact.

Taylor led the final 12 laps run under green-flag conditions and another 13 laps under full- course caution to earn his and Angelelli’s first victory since the sprint race at Watkins Glen last August. It was the second consecutive win for the new Corvette DP program following a breakthrough victory last month at Barber Motorsports Park by co-drivers Westbrook and Antonio Garcia.

Reigning DP co-champions Scott Pruett and Memo Rojas finished second in the No. 01 TELMEX BMW/Riley to take the lead in the DP point standings. They are two points ahead of a four-way tie for second among co-drivers Potolicchio and Ryan Dalziel as well as Alex Popow and Lucas Luhr, 87-85. Darren Law and David Donohue took third in the No. 5 Action Express Racing Corvette DP.

Ferrari made a heralded return to Rolex Series competition this season with its new, GRAND- AM-specific Italia 458 and it took just three races for the prancing horse to return to victory lane in GT competition courtesy of Segal and Assentato in the No. 69 FXDD Ferrari 458. It was the first GT victory for Ferrari since winning the 2003 Rolex Series season finale at Daytona International Speedway.

“I’m just really, really excited about the direction this program is heading,” Segal said. “Obviously, we have a lot of races left to go, but I think everybody is comfortable with the car. We're comfortable with each other, so we're hoping that this is the start of a good run this season.”