DAYTONA BEACH, Fla. – Michael Shank’s phone hasn’t stopped ringing since the last Sunday in January, when his team captured a win in the 50th anniversary Rolex 24 At Daytona. 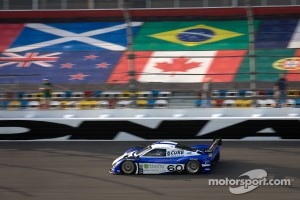 Tuesday, Shank was back at Daytona testing for the 51st edition of the GRAND-AM Rolex Sports Car Series’ premier event, which will open the 2013 season on Jan. 26-27. He wants the phone to keep ringing.

“Winning that race was everything,” Shank said. “It was better than I ever thought it would be – in every single regard. It’s helped me in every single facet of my life.”

“We’re de-bugging it,” Shank said. “Last year, when the No. 6 finished third, it was a second-generation DP. This is a brand-new G3, and it’s working out nicely. … I know the odds of repeating in the Rolex 24 are not in our favor, but I feel solid about our total package.”

“I raced here in January in a Porsche for TRG, and this feels completely different,” said the Vancouver driver. “This car does everything better. Obviously the top speed is better, but it’s incredible on the braking. That gives you a lot of confidence. The other big difference is that running a DP, everything happens in front of you – instead of having to worry about the faster cars coming up on you.”

Over the past week, several major announcements were made that will impact all three Rolex Series classes.

In GT, TRG announced a multi-platform involvement with Aston Martin that will include the Rolex Series in addition to the GRAND-AM Continental Tire Sports Car Challenge and American Le Mans Series. TRG will open again field a multi- car Porsche effort in the Rolex 24, and switch to the new Aston Martin Vantage GT3 early in the season.

The Mazda6 will be the car of choice for the Japanese automaker in the GX class. Powered by SKYACTIV-D Clean Diesel engines, this will mark the first time that diesel-engined cars compete in the Rolex 24.

SpeedSource principal Sylvain Tremblay will return to lead the driver lineup for the No. 70 Mazda. Additional drivers for the No. 70 and new No. 00 full- season entries will be announced in the near future, along with several customer teams.

The first on-track activity for both the GRAND-AM Rolex Series and Continental Tire Sports Car Challenge will be the Roar Before the Rolex 24 test at Daytona International Speedway on Jan. 4-6.