Bell Motorsports gave the sports car fans and the other Rolex Series Daytona Prototype teams a sneak preview of what to expect from the 2003 championship team for the Grand American season opener, the classic 24 hour race at Daytona International ...

Bell Motorsports gave the sports car fans and the other Rolex Series Daytona Prototype teams a sneak preview of what to expect from the 2003 championship team for the Grand American season opener, the classic 24 hour race at Daytona International Speedway. 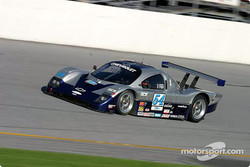 #54 Bell Motorsports Chevrolet Doran: Forest Barber, Terry Borcheller, Andy Pilgrim, Milka Duno.
Photo by John Thawley.
Over the three-day period (Saturday, Sunday and Monday), the Bell Motorsports drivers turned the fastest lap of 1:48.311 for a speed of 118.32 miles per hour in the Chevrolet Doran. 2003 Grand Am Rolex Series driver champion Terry Borcheller will lead the team along with Forest Barber. Andy Pilgrim will join the duo for the 24 hour line up, Milka Duno tested with the team and might be named the fourth driver. Editor's Note: Update from Bell Motorsports.

"The car is good; it ran well and it's been a good weekend," Barber concluded. "I didn't get many laps; I probably ran 25 laps altogether, but the car feels good and I feel comfortable at this track. I think we'll do fine."

Teams from both the Rolex Series and the Grand-Am Cup Series were on hand to test not only their equipment but drivers as well, especially for the Rolex Series as the longer endurance races allow them to add third or fourth drivers.

The Howard-Boss Motorsports Chevrolet Crawford No. 2 was fourth with a time of 1:49.038 (117.53mph) for the one-time driver line up of road racer Andy Wallace and NASCAR stars, Dale Earnhardt Jr and Tony Stewart.

The only other DP to break the one-minute, fifty-second mark was the Doran-Lista Racing Lexus Doran team. The 2002 Grand American driver champion, Didier Theys and his co-driver Fredy Lienhard turned a lap at 1:49.747 (116.77mph).

In the GT class, the Porsche/BMW/Ferrari battle was hot during the testing days, with The 2003 Rolex 24 Hour overall as well as class winners having the final edge. The Racer's Group Porsche No. 66 was clocked at 1:54.785 with a speed of 111.65 miles per hour. Kevin Buckler, Jorg Bergmeister, Timo Bernhard and Patrick Long will co-drive to attempt the team's third consecutive class win. 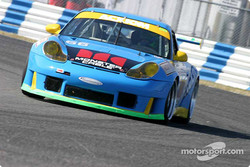 "Daytona is wild," Long commented. "It seems a lot more narrow on the banking than TV makes it look -- it's not the most technical track I've driven, but it's a lot of fun."

Second fastest was the BMW Prototype Technology Group. The No. 21 team had a time of 1:55.121 (111.32mph). The driver lineup for the 24 Hours include Bill Auberlen, Boris Said, Justin Marks and Joey Hand.

The new Super Grand Sport (SGS) class fast time was easily taken by the new AASCO Motorsports team. Drivers' David Murry and Craig Stanton had a time of 1:57.074 for a speed of 109.46 miles per hour in their No. 16 Porsche. The team set the time on Sunday and decided to forego the final day to take the Porsches back to the California shop.

"I feel very optimistic," Stanton expressed about the team's chances for the race. "There are a lot of good teams out there and I think it will come down to the last hour. The team that shows up for that last hour with everything in place will be the winner. I'm not saying we will be that team but I am saying I have never been in a better position to be that team here at the Rolex."