SpeedSource came out on top of the GT category of the 46th Rolex 24 Hours at Daytona, the opening round for the 2008 Grand-Am Rolex Sports Car Series. The No. 70 Mazda RX-8, driven by Sylvain Tremblay, Nick Ham, David Haskell and Raphael Matos, ...

SpeedSource came out on top of the GT category of the 46th Rolex 24 Hours at Daytona, the opening round for the 2008 Grand-Am Rolex Sports Car Series. The No. 70 Mazda RX-8, driven by Sylvain Tremblay, Nick Ham, David Haskell and Raphael Matos, defeated the armada of Porsches and other contenders in the twice-around-the-clock road racing marathon. 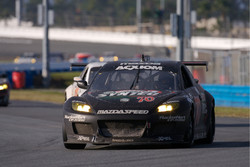 "It's pretty special," said Tremblay, who's also the team owner. "I've dreamed of this since I've started racing. To win at Daytona has been a dream of mine for a long, long time. When I first talked of getting a Mazda running against the Porsches, it seemed like a joke back then. There was so much that had to happen, so many pieces we had to build. Then we had to convince other people to believe in our team, and pull on from there."

The win marked the first for a production-based GT-spec Mazda in the race since 1993 when Dick Greer, Al Bacon Peter Uria and Mike Mees took their RX-7 GTU to victory lane. All in all, 22 Mazda-powered entries have now triumphed in the 24 Hour at Daytona International Speedway. It also marked an end of an era for one of the manufacturer's archrivals. The 2008 race was the first time that Porsche has not at least taken a class win in the Rolex 24 since 1993, the year of the last Mazda victory.

Starting from the pole position, Tremblay knew it was going to be a tough fight ahead, especially with the increased caliber of drivers competing in this year's race. Jokes were even made throughout the garage area that Porsche had brought all of Germany's drivers over with them to Daytona. While not entirely the case, the smaller car outfits like SpeedSource went up against seven-car Porsche "superteams" from TRG and Farnbacher Loles - driven by world's best Porsche drivers, including many factory aces.

"I must say, in all the years I've been racing, the GT field was by far the stiffest, strongest field I've ever seen in any GT race anywhere in the world," Tremblay stated. "I'm proud of the accomplishment of our teammates It's a dream come true."

But the sheer speed of the RX-8 and the reliability of the rotary-powered machine paid dividends, just as their rival's cars were all running into problems, no matter how stellar their driver lineup was. The No. 70 entry fended off an early challenge from the Mastercar Ferrari 430 and fought though the night with the No. 07 Banner Racing Pontiac GXP.R. But often times, it was the Porsches that put up the greatest challenge.

"The guys in the pits were amazing," Haskell said. "The pitstops went like clockwork, they were perfect and the guys drove their hearts off. We got some breaks near the end with the pace car and got some laps up, which helped out a lot."

The quartet completed of 664 laps, finishing seven laps ahead of the second-placed Porsche. 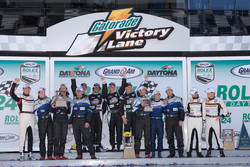 "It was a reasonably uneventful race," Ham explained. "We all had our moments, but the key was that everyone on the team did their job, and did it to the best of their ability. That in the end is why we won. This victory is definitely going to give us a good place to start (for the championship)."

Three of TRG's seven Porsche GT3 Cups finished directly behind the winning RX-8, despite battling issues of their own. The No. 66 entry of Bryce Miller, Ted Ballou, Andy Lally and Richard Westbrook limped home in second. The drivers kept a constant eye on the water temperatures, as the car was overheating during the second half of the race. The No. 67 entry of Spencer Pumpelly, Tim George Jr., Bryan Sellers, Romain Dumas and Emmanuel Collard came crossed the line third, surviving engine worries. Jim Lowe, Jim Pace, Johannes van Overbeek, Tim Sugden and RJ Valentine co-driving the No. 64 machine finished fourth.

"Finishing second, third and fourth is huge for our team and drivers who are competing for the championship in the 2008 Rolex Grand-Am series," said TRG team owner Kevin Buckler. "Naturally, we would have like to win the top spot on the podium, but some mechanical problems and some bad luck prevented that from happening."

Finishing behind the three Porsches was another Mazda - the sister No. 69 SpeedSource entry of Emil Assentato, Nick Longhi, Lonnie Pechnik and Jeff Segal in fifth. The No. 80 Synergy Racing Porsche wound up sixth, with the No. 07 Banner Racing entry the highest of the Pontiacs finishing seventh.

Farnbacher Loles came equipped to the 24-hour with two, if not three, very strong driver line-ups in its Porsches. However, all three suffered setbacks, with their highest-placed Porsche being the No. 87 in eighth. This doesn't bode well for defending series champion Dirk Werner, who wanted to secure more points at the season-opening race.

The Rolex Series will remain in Florida for round two, set to take place at Homestead-Miami Speedway on March 29.